Capt Ron chronicles the Texans' latest game against the Oakland Raiders, and the best start for any new head coach in franchise history. 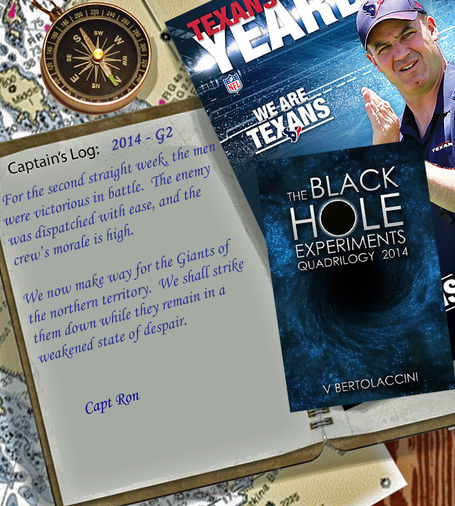 The Texans traveled to the infamous black hole in Oakland and left it as an even larger vortex of desecration by the end of the game.  The Texans have only allowed 6 points scored against them in the first 7 quarters of football for the 2014 season.  This Oakland game would have been a shutout if not for the 14 "garbage-time" points in the 4th quarter.

J.J. Watt lining up as a tight end, and scoring a touchdown, gave me the best feeling about where this team is going under coach Bill O'Brien.  He is bringing such a fresh approach to game-planning week to week.  Speaking of O'Brien, he is the first head coach in franchise history to start out 2-0 in the first year with the team. Dom Capers won the Texans' inaugural game against the Cowboys, and then went on a five-game losing streak to finish the season 4-12 in last place in the AFC South.  Gary Kubiak started out 0-3 before defeating the Dolphins at Relaint Stadium, ending the year with a 6-10 record at the bottom of the AFC South.  O'Brien is off to a great start!

Four turnovers created!  While the Texans didn't record any sacks, there was plenty of pressure.  J.J. Watt hit Derek Carr's arm as he was throwing the ball, sending it into the waiting arms of Brooks Reed for an interception.  There are good things happening for Houston, and it still feels like they are holding back as they continue to build early momentum for the 2014 season.

The Colts lost in spectacular fashion against the Eagles on Monday Night Football 30-27, and start the season 0-2.  They should rebound next week as they visit the struggling Jaguars in Jacksonville.

The Jaguars allowed a whopping 10 sacks on quarterback Chad Henne, while their defense was shredded by Redskins' backup quarterback Kirk Cousins; they lost to Washington 41-10.  They host the Colts next, and at least one of these two teams will finally get their first win of the season....maybe.

D.J. Swearinger hyperextended his elbow, but is expected to be fine.

As always, we'll keep you updated on any new developments.

"Though much is taken, much abides, and though we are not now that strength which in old days moved earth and heaven, that which we are, we are... One equal temper of heroic hearts, made weak by time and fate, but strong in will to strive, to seek, to find, and not to yield."

Foster shouldered the load in this game, with 28 rushes for 138 yards and 1 touchdown, and 2 receptions for 12 yards.  In the first two games of the season, he has carried the ball 55 times for 241 yards.  That is a heavy load to start the year, and it helped propel the Texans to their fifth consecutive season of starting 2-0.  While we applaud Foster's performances, we should also hope there is wider distribution of the sled-work in coming weeks to keep him from burning out too soon.

Kareem Jackson had an outstanding performance, including an interception returned 65 yards to help suck the life out of the Raiders.  He's going to cost a lot to re-sign, but he is well worth it.  Hopefully the cap increase next year provides the room necessary for the Texans to keep this guy around for many more years.

The O'Brien era is showing a very disciplined team.  There hasn't been a lot to overtly criticize in terms of mistakes, although we could spotlight Ryan Griffin for his three holding penalties.  Two were back to back and obliterated a drive in one series.  He was dealing with a defensive tackle that had about a 50 pound advantage, so the coaches need to ensure we have the right formations and personnel using the best technique to get things done.

"Don't you get it?  He knows us!  He's one of us! He comes from the same place as Bond, a place you say doesn't exist: the shadows!"

So um…James Jones made a great catch. Fumbled. Picked it up and gained more yards. Then fumbled again. Texans recovered.

O'Brien talks to Clowney every day since surgery. Says Clowney was disappointed but he's over it and headed in the right direction. #Texans

In an effort to conserve screen-scrolling on your part for this article, I'll link two recipes that I have used, and modified, with great success:

It is pronounced as "COO-be-YON," and it is one of my absolute favorite sauces to work with.  Obviously you should substitute ingredients and seasoning to your personal preference.  While it is a fine dish as prescribed in these traditional recipes, I prefer to make this sauce without the fish as the main protein.  Instead, I add crawfish and small-medium (32 count) shrimp in place of the fish to make this a sauce topping.

There is a wide application for this sauce; my favorite is to pour it generously over fried oysters.  The combination of texture and flavor is something out of this world!  This sauce is perfect for tailgating at games or house-viewing parties, as you can make it a day or two before and just heat it up on site.  Stuff it in baked potatoes, serve it over rice, pour it over blackened fish, and so on.

Give it a try, and let me know how you used this versatile and flavorful sauce.

Next up, the Texans head to New York to play the Giants on Sunday, September 21st at 12 p.m. CDT.