Sponsored Post: Which Houston Texan Keeps The Team Focused On The Field?

Because Marshall Faulk and GMC asked, let us call our shot and answer that query as it pertains to your Houston Texans.

Share All sharing options for: Sponsored Post: Which Houston Texan Keeps The Team Focused On The Field?

This is a tough question for the Houston Texans, as they are still finding their new identity in this new era of coaching with Bill O'Brien in his first season.  It is made even more challenging since O'Brien chose to remove the NFL tradition of having consistent captains on the team; he had the jersey "captain" patches removed and is going with named captains for each game throughout the season.

I think it is considered "low-hanging fruit" to pick a quarterback as the leader on most teams; that is typically the first and last definition of the role for the leader on offense.  While Ryan Fitzpatrick certainly is doing a solid job in that aspect, he is still new to this team.  In years past, Brian Cushing would be an easy target with his signal-calling responsibilities at middle linebacker and his relentless "heart of the defense" presence.

I'm going with J.J. Watt, because he is more than just a leader on defense.  Watt has transcended what it means to lead by example on and off the field, and he is a profound inspiration to his teammates wherever he lines up.  In just two short games of the 2014 season, Watt has affected the stat-line in all three phases of the game with a reception for a touchdown on offense, and a blocked P.A.T..  In his core role on defense: one fumble recovery, one tipped ball that was intercepted, one sack, two tackles for a loss and dozens of quarterback pressures.

J.J. Watt keeps the Texans focused on the field to win, not just each game, but to win against the opponent on EVERY play.  He is THE rallying cry for the entire Houston Texans football team. 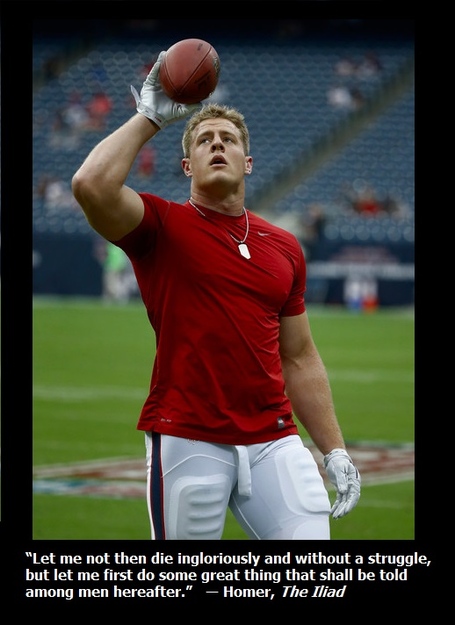