The Film Room: Arian Foster Demonstrates How To Set Up Blockers

Ever wondered what separates a good running back from a great running back? Let Arian Foster show you what it means to be a three time All-Pro as BRB's Brett Kollmann breaks down the film.

Share All sharing options for: The Film Room: Arian Foster Demonstrates How To Set Up Blockers

Going into the 2014 season, I confess that I was nervous about Arian Foster. The greatest running back in Texans' history was banged up in training camp, did not play a single snap in all of preseason, and was being thrown into a new offense with principles that Gary Kubiak rarely (if ever) used.

Would he be healthy? Would he be productive? Would he be the same runner on power plays that he was in zone plays? Fortunately for my admittedly foolish self, the answers to those questions are yes, yes, and hell freakin’ yes. One run in particular in the second quarter of the Raiders-Texans game really stood out to me as the definitive statement that Arian Foster is indeed "back".

The Texans are in "11" personnel (one back, one tight end) on 3rd and 9 against a 3-3-5 nickel package from the Raiders. Ryan Fitzpatrick checks to a simple power run at the line of scrimmage against a light box as the Oakland linebackers try to sort themselves out. Brandon Brooks is tasked with washing former Texan Antonio Smith down the line of scrimmage while Ben Jones pulls and locates the first inside linebacker to fill the intended rushing lane in the B gap. Meanwhile, Chris Myers and Duane Brown pick up Lamarr Woodley in Jones’ now vacated gap. 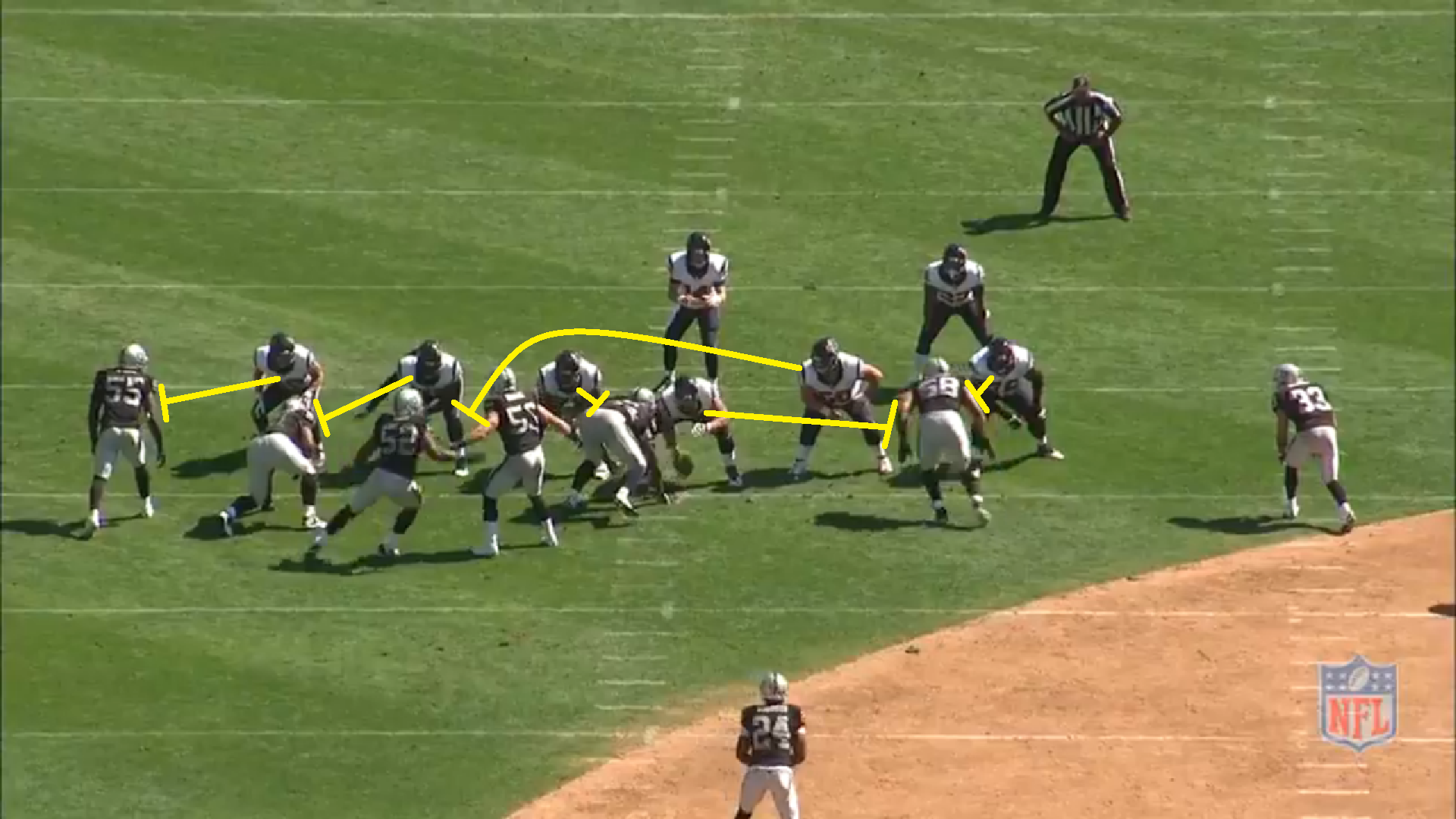 The ball is snapped. So far, so good. 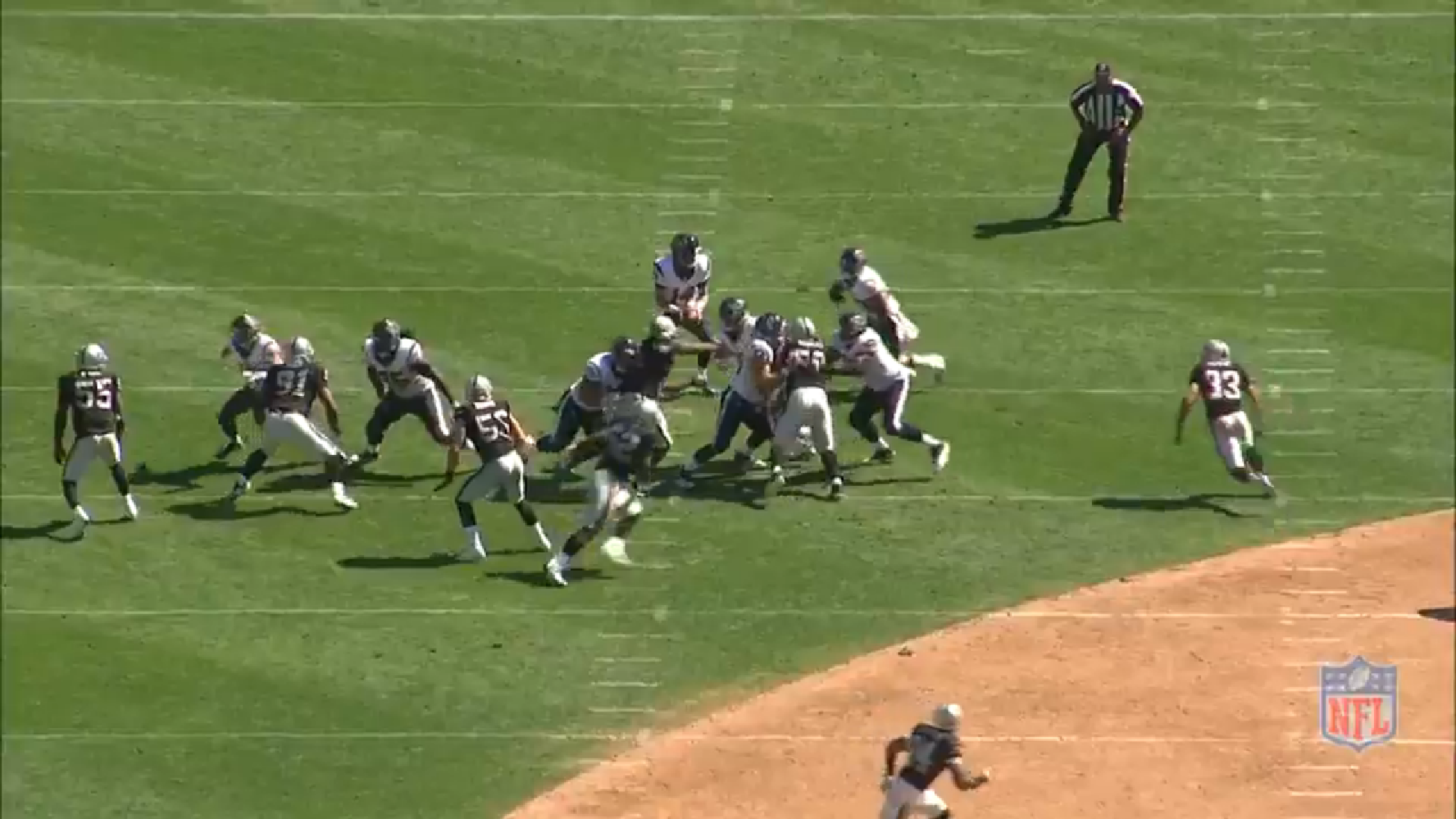 The key to this play’s success is spacing. Foster needs to get to the open field outside the hashes on this play if Houston has any hope of a first down, so Ben Jones must block the outside half of linebacker Miles Burris (#56). By blocking the outside half of his man, Jones has enough leverage to seal the intended lane in the B gap (red arrow) away from the other unblocked linebacker on the back side, Khalil Mack (#52).

Foster has his own role to play in opening the lane, however. Jones’ job will be made infinitely easier if Foster presses inside to the A gap (blue arrow), which will force a reaction from Burris inside and give Jones the leverage he needs to seal the outside lane. When you hear commentators talking about a running back "setting up his blocks", this is exactly what they mean. 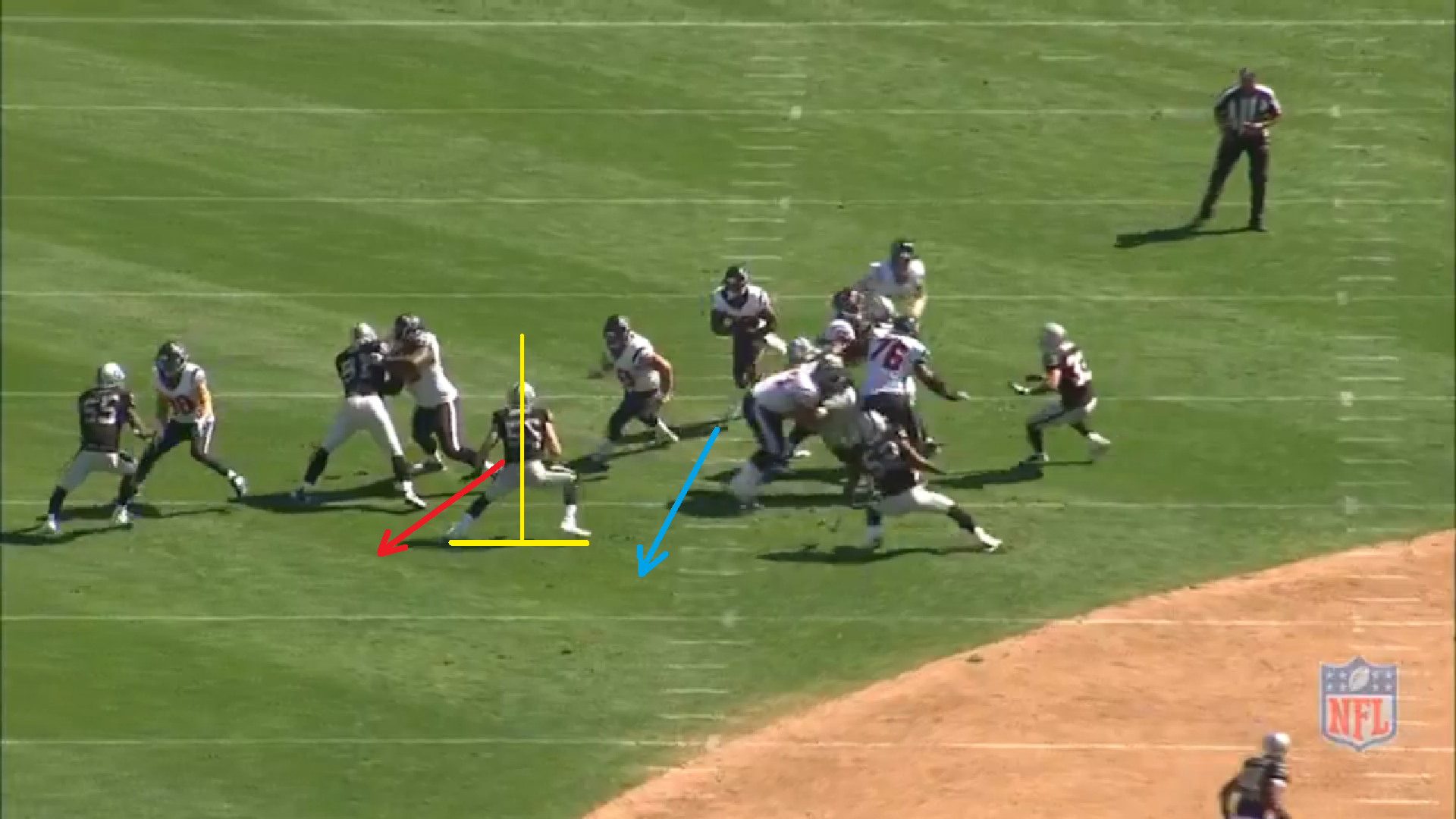 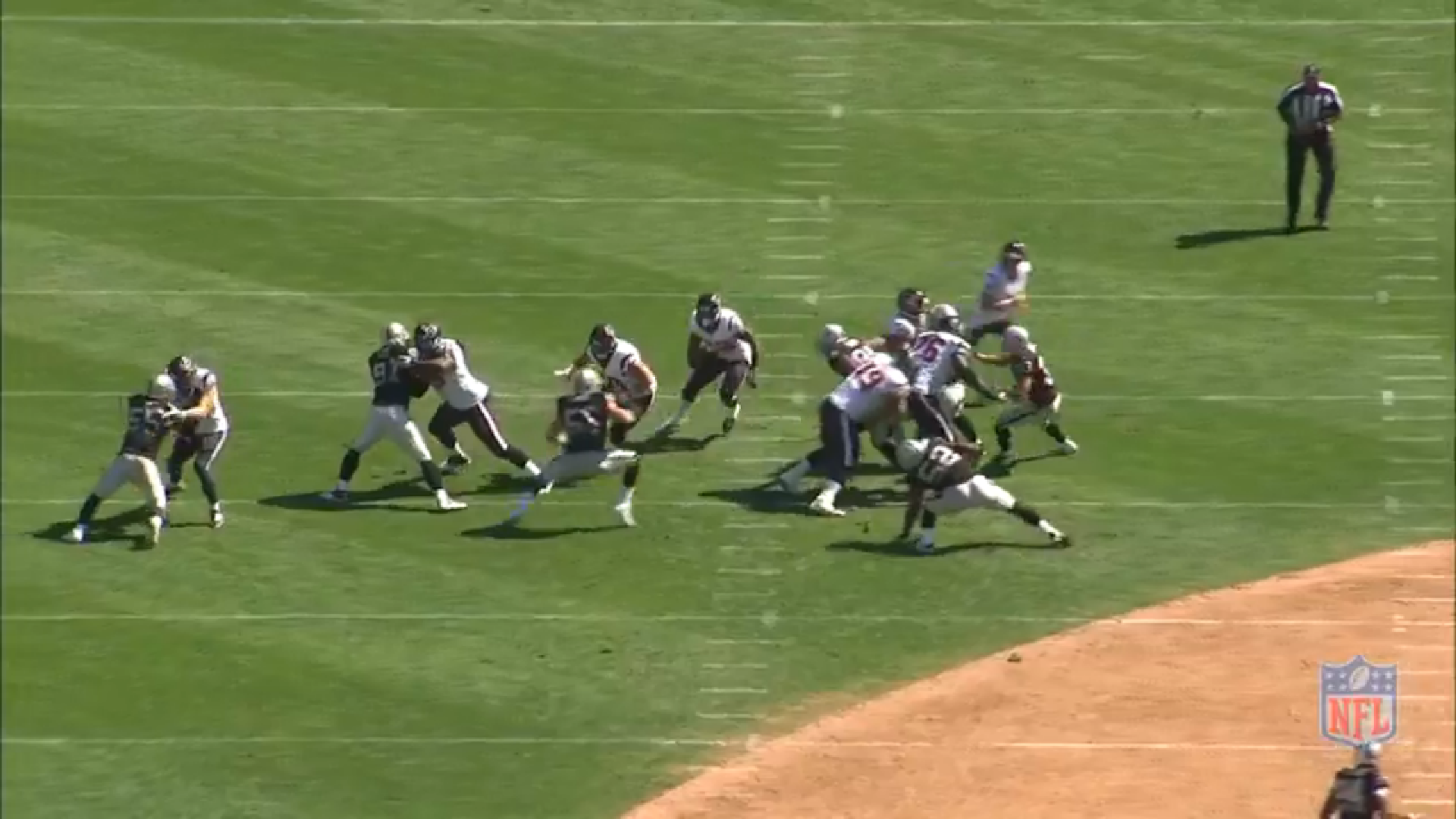 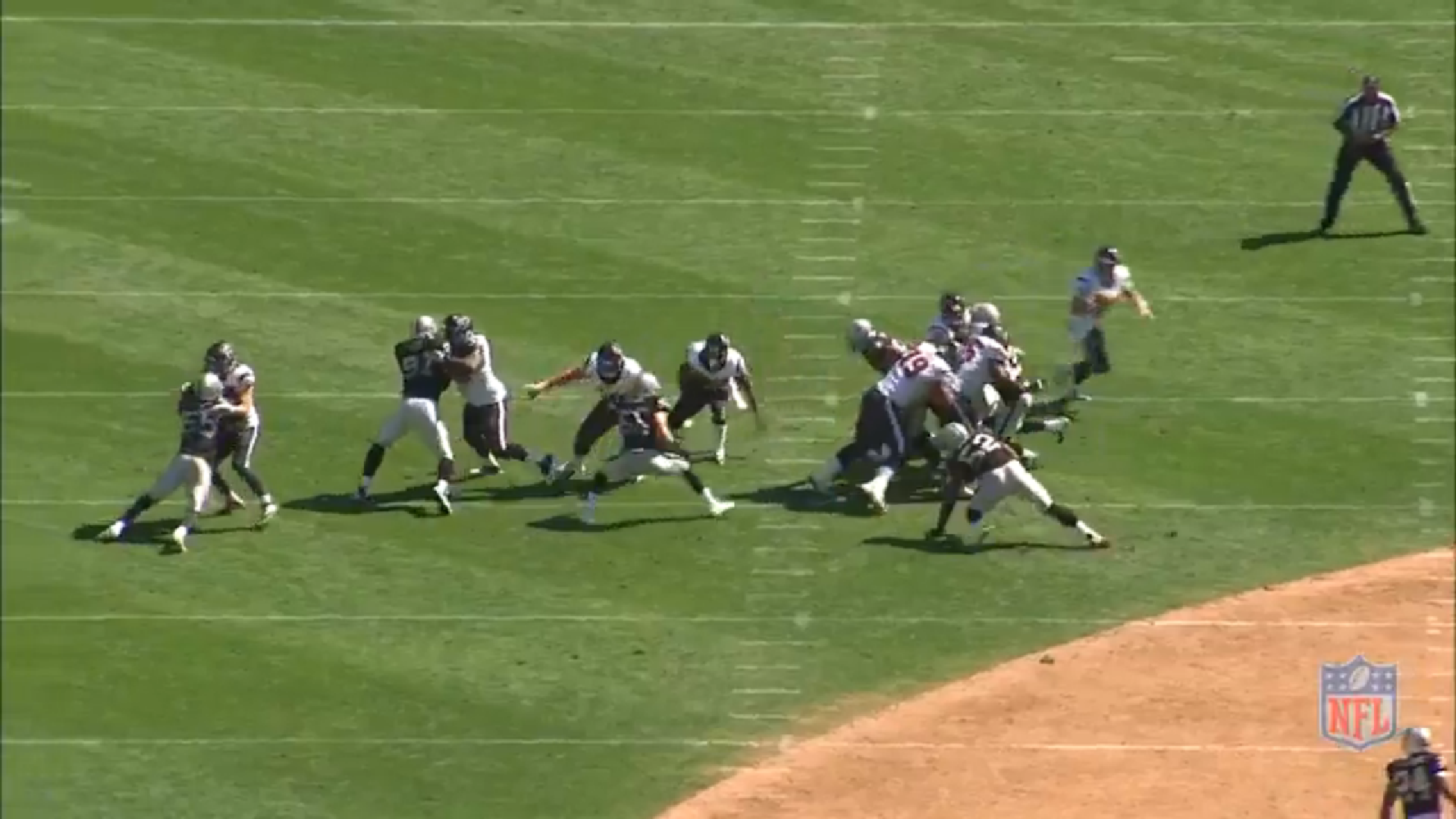 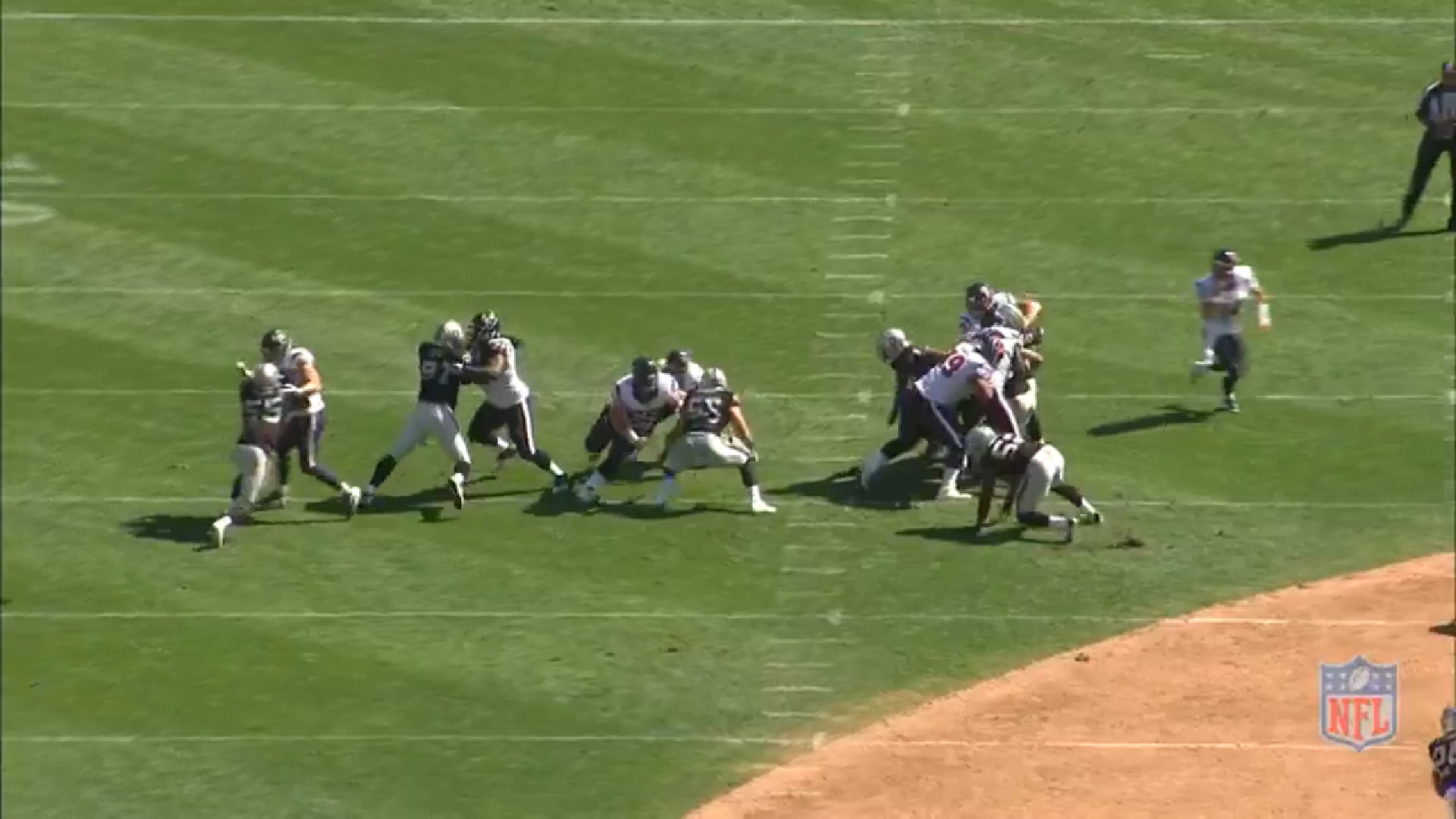 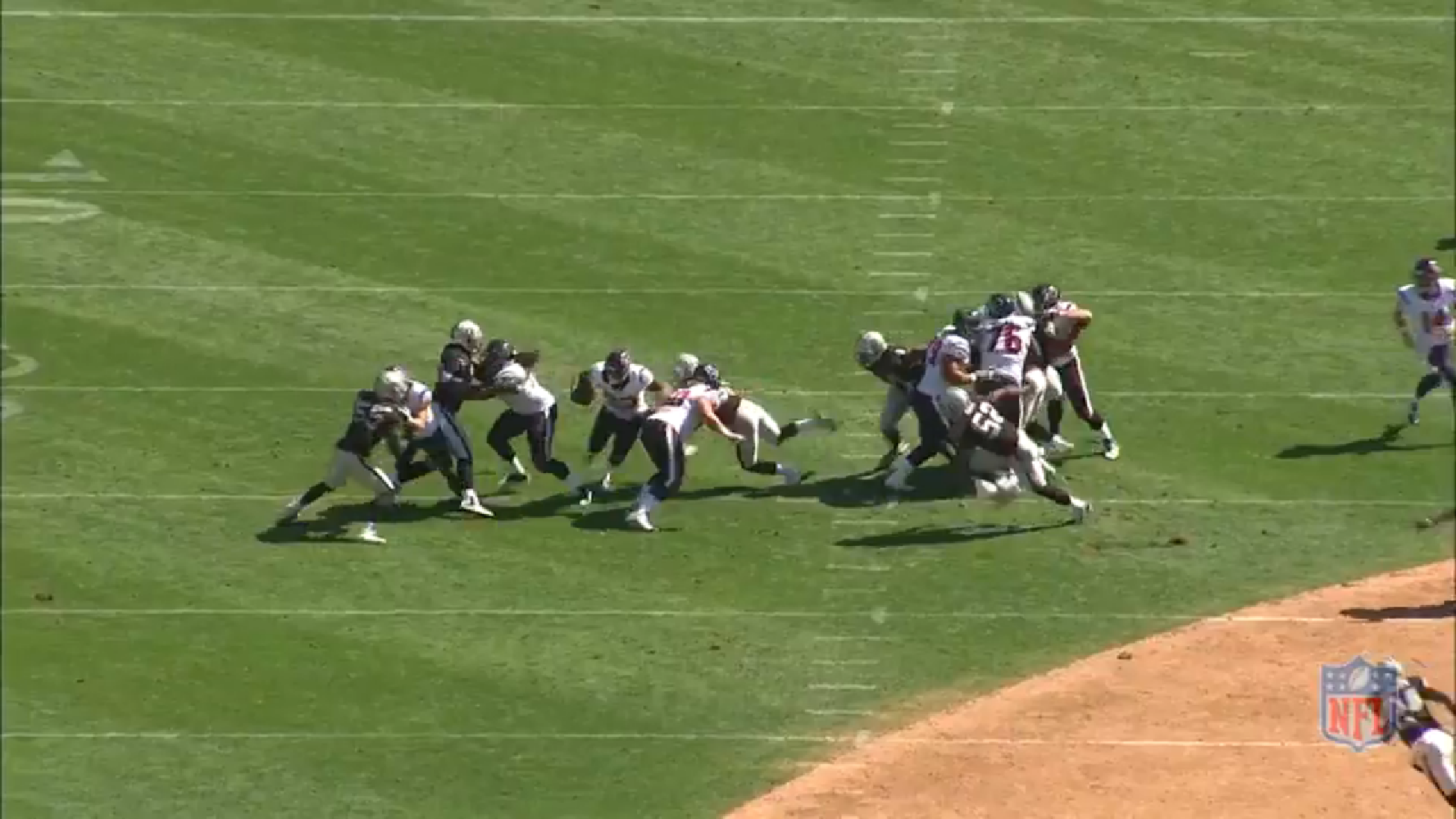 And that, my friends, is how you break into daylight. Take a look at this play in full speed to get a true sense of just how spectacular Foster makes even the simplest of runs look.  As an added bonus, check out this other gap scheme run that Foster set up beautifully for a nice gain on the first play of the game. Poetry in motion, people…poetry in motion.

Texans fans are witnessing a rare breed of football player here. Now that #23 is healthy again, I suggest that everyone savor this while they still can. It may be awhile before Houston gets another running back like this one.