Capt Ron chronicles the Texans' latest game against the New York Giants and the first loss of the 2014 season. 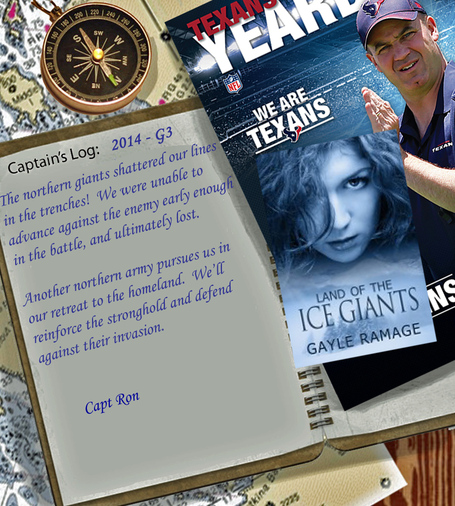 The good news is that the Texans are 2-1 and in first place of the AFC South.  I'd also add that this loss was a non-conference game, so it has less weight in future tiebreakers.  The other good news, in a week around the NFL that played out like the infamous Red Wedding from "Game of Thrones," is that the Texans are still doing relatively well injury-wise.

The bad news?  Let's start with the fact that the Texans invested high round picks in the 2014 NFL Draft on several players who are not currently making a difference in games.  The first-overall pick, Jadeveon Clowney, is out with an injury, so we can cut him some slack for now.  Xavier Su'a-Filo, the 33rd overall pick, has only played in a handful of snaps in three games.  Louis Nix III, who the Texans traded up to pick in the third round, has been inactive every game.  C.J. Fiedorowicz, picked at the top of the third round, has been in games, but the Texans don't seem to be getting tight ends involved in the passing game very much for some reason.

Now I'm all for building nasty, earth-moving lines to win the war in the trenches on offense and defense, but to invest this much and not see these players on the field as both lines are getting blown up by the opponent is unacceptable.  We could easily start banging the gong and raging about how the Texans did this at the expense of not drafting one of several quarterbacks in those higher rounds, but it was obvious that their drafting plans were to build stronger foundations before getting a franchise quarterback.  If that is going to be the plan, WHEN do we see them making a difference to help this team?

Not to spark a debate about whether the Texans should have picked Clowney first overall, or any of these other "trench" guys who aren't making any significant contributions, but did anyone else notice how easy it was to take J.J. Watt out of the game yesterday or last week?  The refs are focusing on big hits and downrange contact, but they continue to ignore blatant holding by offensive linemen.  I see many plays in every game where Watt has some lineman hanging on him with arms wrapped around J.J.'s neck as he drags the blocker toward the quarterback.  With the league's officials tailoring the game subjectively like this, it's just another reason why a quarterback can bring more value to a team than any other position if you are choosing one over the other in the draft or free agency.  You would think you would get more for your investment in the trenches, but the refs get to determine that it seems.

Speaking of quarterbacks, I'm not going to go into any rants about Ryan Fitzpatrick.  He is who he is.  There were plays where he put his heart out there and tried to make something happen.  Sometimes it worked.  But there were times when it didn't.  That's been his profile now for most of his career.  I don't know if Ryan Mallett would have made a difference in yesterday's game, but could he have been much worse?

The Texans are not going to win every game, so I'm ready to move past this loss.  Bill O'Brien and the staff have their work cut out for them to prepare for C.J. Spiller, Mario Williams and the Bills.  They are not going to win many games if they let running backs like Spiller break loose.  Only converting 2 of 16 third downs (16%) and losing the turnover battle is also not going to get you a "W" in the NFL.  Clean it up, and move forward!

The Titans lost to the Bengals 33-7.  Tennessee is 1-2 as they head to Lucas Oil Stadium to face the Colts.

The Jaguars were pummeled by the Colts to remain without a win this season.  It is being reported that Blake Bortles will start against the 2-1 Chargers as they travel to San Diego next week.

"I'm a doctor, not Lord Commander of the Night's Watch!"

Jadeveon Clowney continues to recover from his knee surgery.

Arian Foster missed this game with a hamstring injury.

"Has the whole world gone crazy? Am I the only one around here who gives a shit about the rules? Mark it zero!"

Hopkins' one-handed circus catch over the middle was the highlight of the game yesterday.  Unfortunately it was negated by an illegal formation penalty.  He finished the day with 6 receptions for 116 yards and showed to be the brightest spot in an otherwise inept offense.

The amazing one-handed catch by Hopkins was called back for an illegal formation.  The referee said that the receiver (Hopkins) covered Tyson Clabo, who reported in as "eligible."  If you look at the image below, you'll see Clabo is lined up as a tight end next to Newton.  I get that they are still installing this new offense, but the players should know how to line up at the NFL level.  I guess it's early in the season under a new scheme, so we'll have some mistakes.  It's just really depressing that it erased a great play in this case. 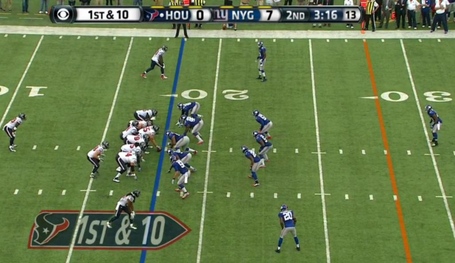 "I'm the Dude. So that's what you call me. You know, that or, uh, His Dudeness, or uh, Duder, or El Duderino if you're not into the whole brevity thing."

O'Brien says it was actually Hopkins who was lined up illegally on his catch that got called back. #Texans

Upon kickoff, Alfred Blue will have more starts this season than Matt Schaub. (Texans traded Schaub for the 6th round pick used on Blue.)

I'm convinced that Ben Jones had a rough day in New York after getting rolled-up by a Raider in Oakland:

With nine more catches, the #Texans' Andre Johnson will move into No. 11 on the all-time receptions list.

Another great recipe that is perfect for tailgating and/or hosting Texans' game watching parties is this meatball recipe.  I learned of it from a friend in London who directed me to this BBC site for the recipe.  I tested it in my kitchen, and it was a huge hit.  Sure, I have other meatball recipes, but this one really stood out in providing a meatball that not only tasted great, but travels well too.  I thought it would be a good edition to our focus on Texans game-day food options.  It has bacon!

· handful parsley (or whatever herbs you prefer - oregano, thyme and sage all work well), chopped

Next up, the Texans host the Buffalo Bills on Sunday, September 28th at 12 p.m. CDT.

Mario Williams is returning to Houston with his northern army! 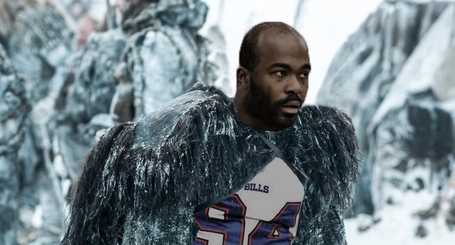