Capt Ron chronicles the Texans' latest game against the Bills and the amazing determination of J.J. Watt. 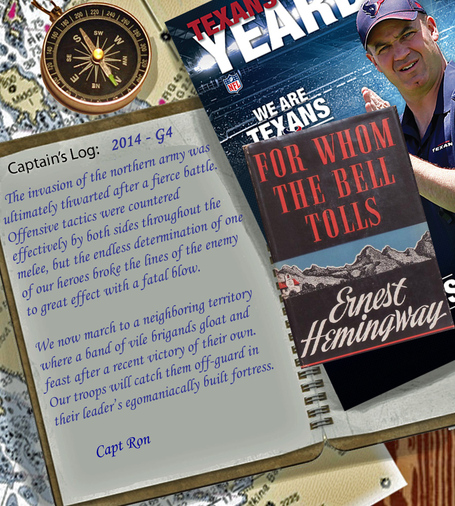 My family was in town from Austin this weekend, and my sister and her friend both revealed that they had never been to an NFL game.  Her friend recently relocated to Austin from Washington state, and she is quickly embracing life in Texas.  I checked online and found seats at a very reasonable price, so we spontaneously decided to attend the Texans-Bills game.

After more than a decade of never missing Texans' home games, I only attended the Patriots game last year.  It felt odd not to be making that regular trip over to Kirby last season, so this year I am determined to find two or three games that we can attend.  We left early yesterday so that we could tailgate with some old friends, and we ran into several others inside the stadium who we haven't seen in a long time as well.  It was great to be there, and I look forward to a few more visits this year.  There is a lot to be said for the stadium game experience with the Texans.

The game was a close-fought battle, and the crowd was electric all the way to the end.  I decided to use a decibel meter application on my phone, and here are the results:

I'm pleased to report that my sister, who is already a Texans fan, and her friend REALLY enjoyed their first NFL game experience.  It was fun to see them getting into the celebrations throughout the day.  We may have ourselves a newly converted Texans fan after Watt and the team earned her respect in an exciting win over the Bills.

The Colts ruined the Titans' afternoon in a 41-17 blowout as Andrew Luck notched his second consecutive game with 4 touchdowns.  They are now 2-2 on the season and will host the 3-1 Ravens next week.

The Titans, now 1-3 after being routed by the Colts, host the Browns next week.

The Jaguars flew to San Diego and continued their winless season in a loss to the Chargers with a score of 33-14.  In Blake Bortles' first NFL start, he twice had the Jaguars leading in the first half before Philip Rivers rallied back to victory.  Bortles' final stats: 29/37, 253 yards, 1 touchdown, and 2 interceptions.  Jacksonville hosts the 2-2 Steelers next week.

"I'm a doctor!  I have no knowledge regarding the rules for offensive linemen flagged for pass interference."

"Yea, there were horses and a man on fire and I killed a guy with a trident."

There really are no words to describe what we are watching each game as this man fills the NFL record books.  I suspect someday I'll have grandkids, and even great-grandkids, who will stare blankly at me with dropped jaws as I reflect on what it was like to be in the stadium both times (so far) when J.J. Watt took interceptions to the house.

Watt had 3 tackles, 1 pass defended, the interception returned 80 yards for a touchdown, and an unbelievable 9 hits on the QB.  Just for reference, a defensive player is having a great day if they get a couple of hits on a QB in a game.  The pick-6 came at a crucial point, as Buffalo was driving into the red-zone while leading 10-7.  This play flipped the momentum completely, by instantly giving Houston a 14-10 lead in front of a high-energy crowd.  The Texans were fueled to finish from that point on.

I looked up the word "intrepid" to describe Watt, and I found this definition:

So I stand corrected.  I guess there are words to describe J.J. after all.  Incredible!

With A.J. Bouye inactive due to a groin injury, San Antonio native Darryl Morris stepped up and had an amazing day to help the Texans' defense.  He was in position for three critical passes defended, four tackles, one tackle for a loss, and nearly enabled the downing of a punt inside the two-yard line on special teams.  He ended the day with an interception with 1:07 remaining in the game; that ensured the Texans' victory over the Bills.

He kicked 41, 55, and 50 yard field goals in this game and is 8 of 9 so far this year.  The 55-yarder in this game is his longest of the season, and it looked like it could have gone for 65!  After a shaky rookie season with inconsistent results, Bullock has really become a weapon for Houston.  Given the challenges this team has on offense, he is critical to success in what will likely be many close games in 2014.

What impresses me with the Texans under coach Bill O'Brien in 2014, is that we really don't see a player (or two) who we can nail to the wall for failing bad enough to toss into "The Brig" as we review the game.  There are mistakes made, but none so egregious as to warrant flame-worthy ire as in years past.

If anything, I'd direct attention back to the NFL for the continued frustration we have regarding inconsistent officiating from crew to crew and game to game.  Again, how can there be such great variance in application of the rules?

"Boy, that escalated quickly. I mean that really got out of hand fast!"

Watt: "I get personal fouls called against me all day & I get some extra-curriculars done to me & I don't see any repercussions."  #Texans

Xavier Su'a-Filo could become Mike Iupati and the decision to not take Brdigewater would still be egregious.

In the same week I was asked to provide a friend with a new chicken recipe, I saw this tweet by Jamie Oliver.  I tested it and loved it!  This would easily travel well for tailgating and Texans watching parties.  Give it a go!  To save you from scrolling endlessly in this article, here's the tweet with the link to his website:

Next up, the Texans travel to Dallas to battle for bragging rights in Texas.  This October 5th game starts at 12 p.m. CDT.