The Film Room: Ryan Mallett (Houston, We Have A Monster)

Ryan Mallett's preseason with the Patriots was statistically underwhelming, but the eye in the sky doesn't lie. The Houston Texans just nabbed themselves a terrific quarterback.

Share All sharing options for: The Film Room: Ryan Mallett (Houston, We Have A Monster)

Like most Texans fans, I was skeptical when first hearing about Bill O’Brien making a move to acquire Ryan Mallett. The former Arkansas Razorback and New England Patriot was a completely unknown commodity with just one year left on his contract, and his most notable claim to fame was tumbling in the 2011 NFL Draft for a plethora of off-the-field concerns. Even for a conditional sixth round pick, I questioned what sort of value Ryan Mallett could bring to the team.

And then I watched him play.

I am a firm believer that in order for one to have any sort of credibility when they are proven right, they must also admit when they are wrong.  I was dead wrong about Ryan Mallett. The combined package of pure arm talent, pocket presence, and mental acuity that I saw against Philadelphia and Washington in the preseason was far beyond anything shown from any Texans quarterback this August. Some of Mallett’s throws were simply breathtaking. Patriots fans and media alike have always raved about the Howitzer attached to Mallett’s shoulder, but actually seeing the ball jump off his hands is an experience that exceeds all expectations. What excited me the most about Mallett’s preseason, however, was not physical.  It was cerebral.

Out of 34 charted drop-backs in these two games, Mallett did not make a single "bad" read. Every decision, whether running or passing, was on point. Although Mallett’s 53% completion rate and 85.6 passer rating might suggest a mediocre performance, the tape reveals an almost surgical approach to the game. Take this first quarter snap against the Redskins as an example.

New England is running a hi-lo zone beater concept to the right and a rub concept to the left to beat man. Mallett identifies the single high safety look and knows that Washington is either running Cover One with man coverage underneath or a Cover Three zone. The hi-lo route combination should free at least one receiver up against the more likely defensive look, Cover Three, so that is Mallett’s first read. In the event of man coverage, Mallett’s next progression is the dart route over the middle that should come free from the rub (blue arrow). 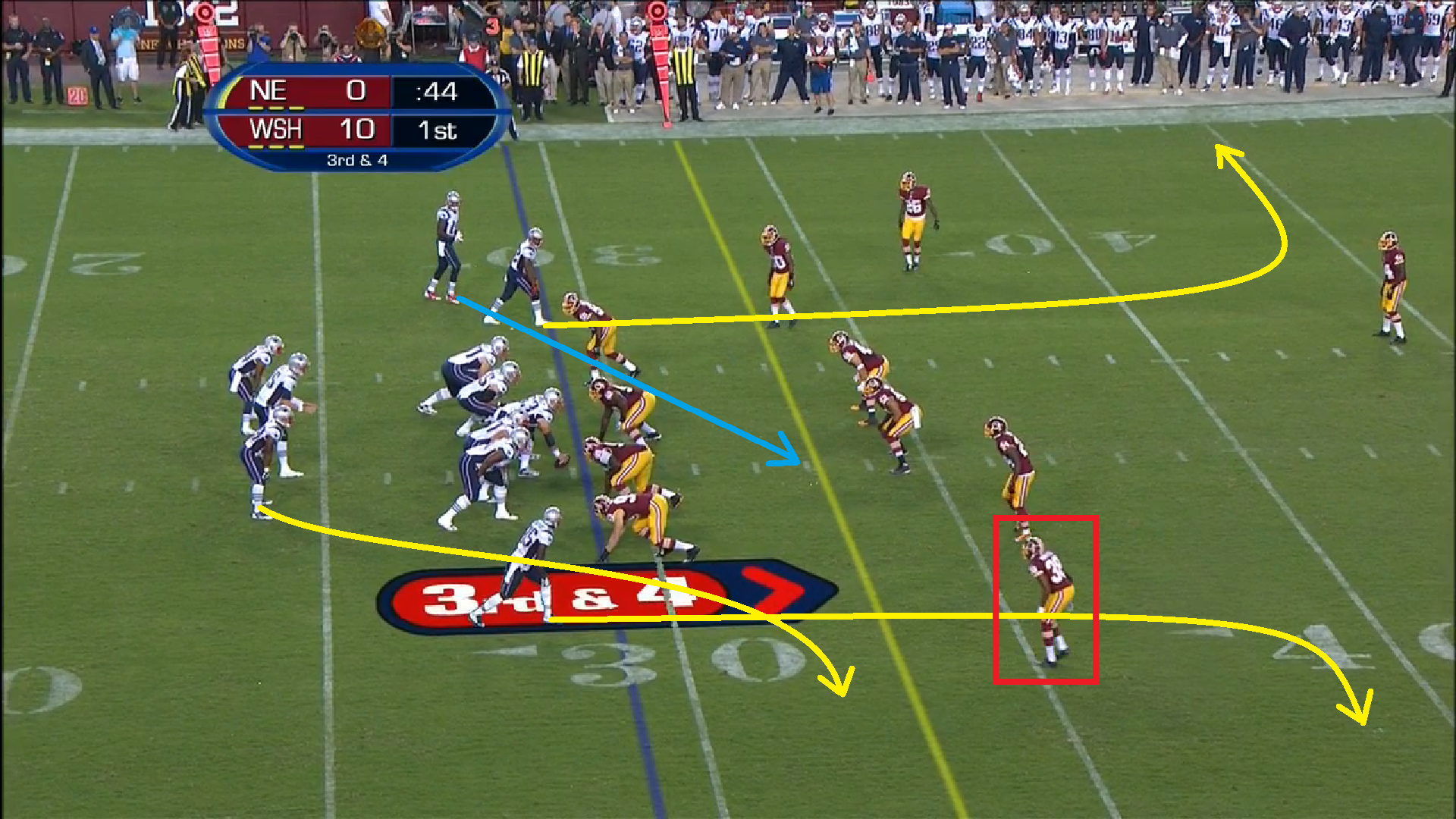 Mallett keeps his eyes dead center to freeze the deep zones while double checking whether the linebackers are dropping into zone or trailing receivers in man. As expected, Washington is running a Cover Three. 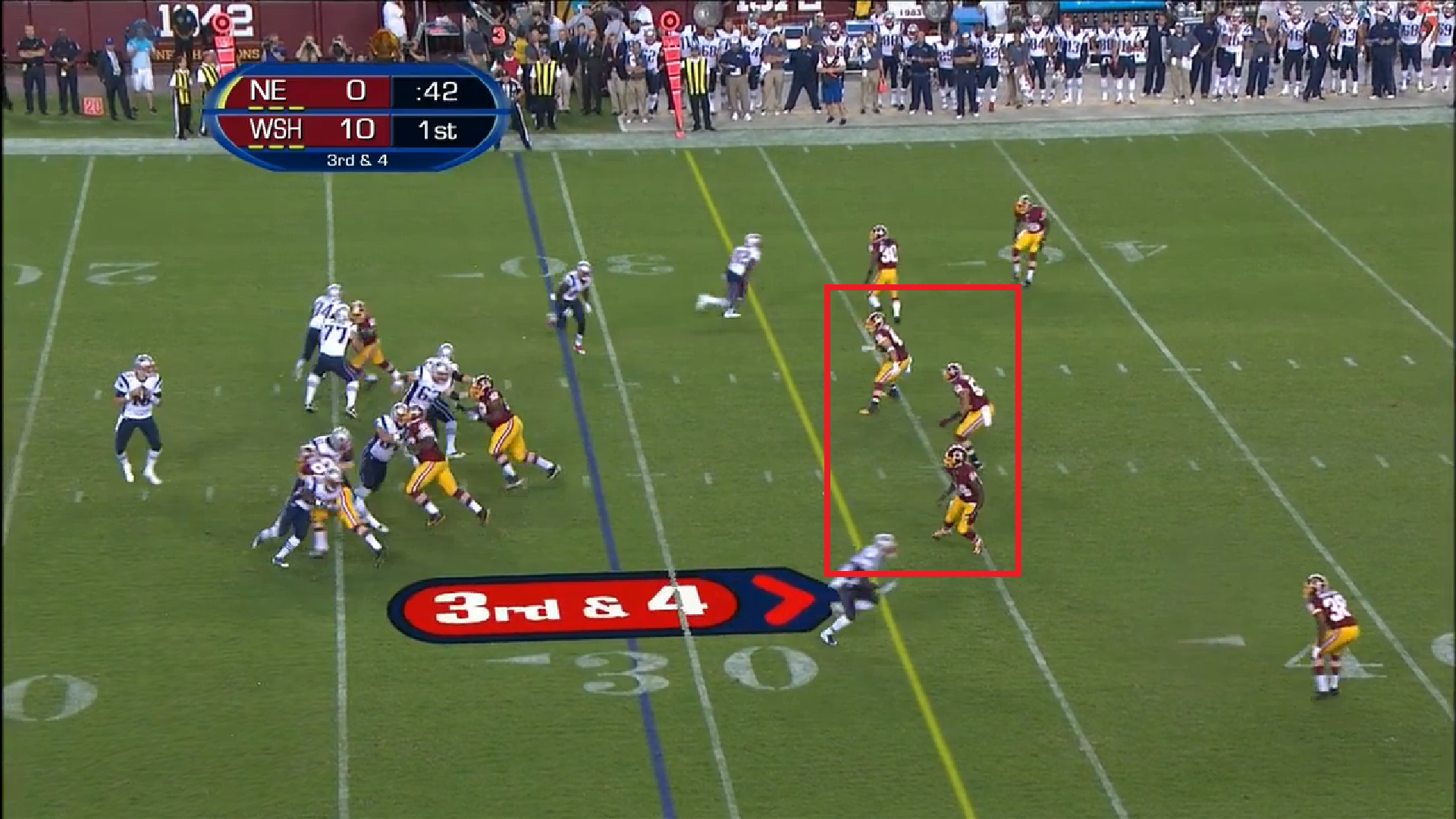 Mallett already knows that the speed cut under the deep third zone should be open against Cover Three, so he immediately turns and fires a bullet to his receiver, Kenbrell Thompkins. Thompkins does a good job at flattening his route away from the corner to maintain good body positioning and hauls the pass in. Although preseason coverages are usually fairly vanilla, this is a clinical read by Mallett and the exact kind of throw that franchise quarterbacks need to make to keep drives alive. 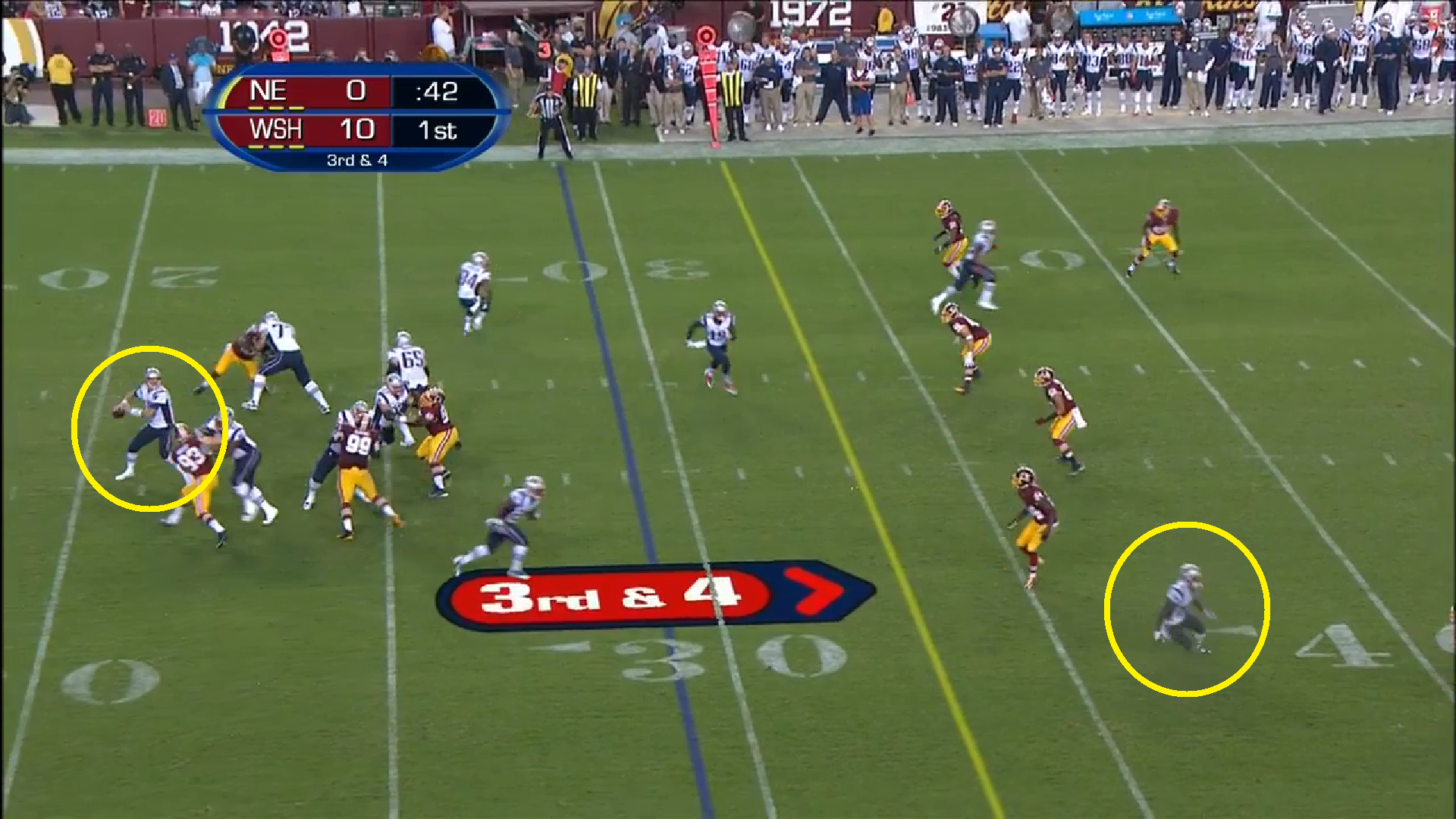 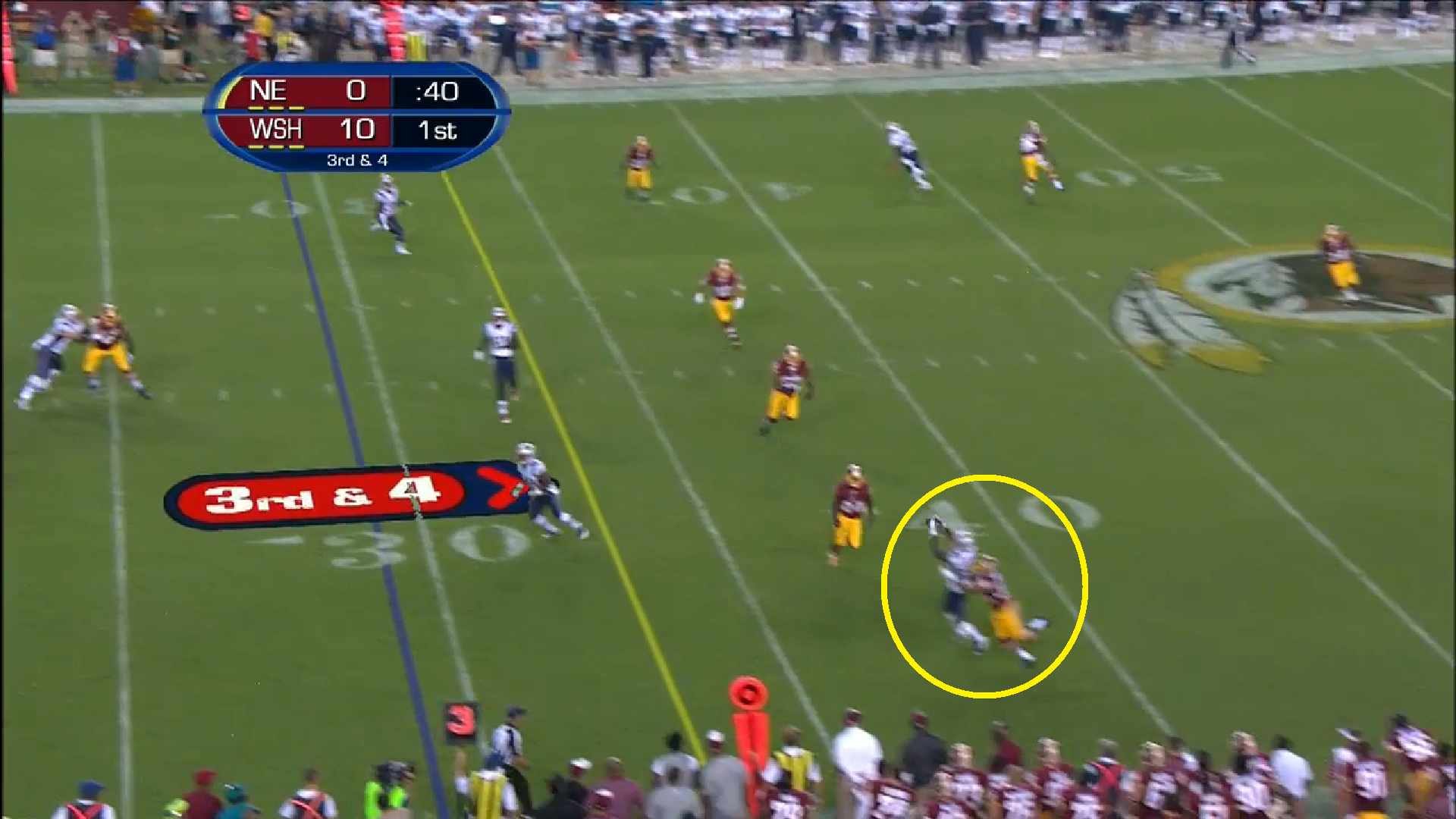 One of the more underrated traits of a good quarterback is eye discipline. Making good reads and having the arm to make tough throws is obviously important, but young quarterbacks who can force open holes in defenses by deceiving people with their eyes are rarer than one might think. Watch the hole open up over the middle for Josh Boyce when Mallett holds the inside linebacker, Will Compton, to the far hash with his eyes. Upon closer inspection, the slightest shift in Mallett’s shoulders is noticeable as he resets and throws a laser to Boyce in the open space.

Speaking of throwing a laser, Mallett’s ability to sling it across his body while rolling out is truly awe inspiring. The Houston Texans may legitimately now have the strongest arm in the NFL on their roster.

Even when a more delicate touch is required, Mallett has flashed the ability to drop the ball into the smallest of buckets. If he were throwing to a combination of Andre Johnson and DeAndre Hopkins rather than Josh Boyce and Brian Tyms, there is no doubt in my mind that Mallett’s preseason would have been statistically bonkers.

Receivers dropping passes was an all too common site for the Patriots this preseason. Mallett made every read correctly and routinely put his team mates in the best possible positions to succeed.  Yet time and time again, he was let down by butterfingered pass catchers.

New England is once again running a combination of zone beaters and man beaters for Mallett to read post-snap. On the far side of the field, Kenbrell Thompkins is running a spot route to just inside the numbers, while a wheel route from Roy Finch out of the backfield creates a horizontal stretch on the cornerback (red box). If the corner is playing zone and "hanging" on the wheel route, Mallett is immediately going to progress to the man-beaters on the near side of the field. If the corner is covering Thompkins man-to-man, that would indicate that Finch is being covered in man by the weak side safety (orange box), Trenton Robinson, who would have a sizable amount of ground to cover before getting close to stopping the wheel route. 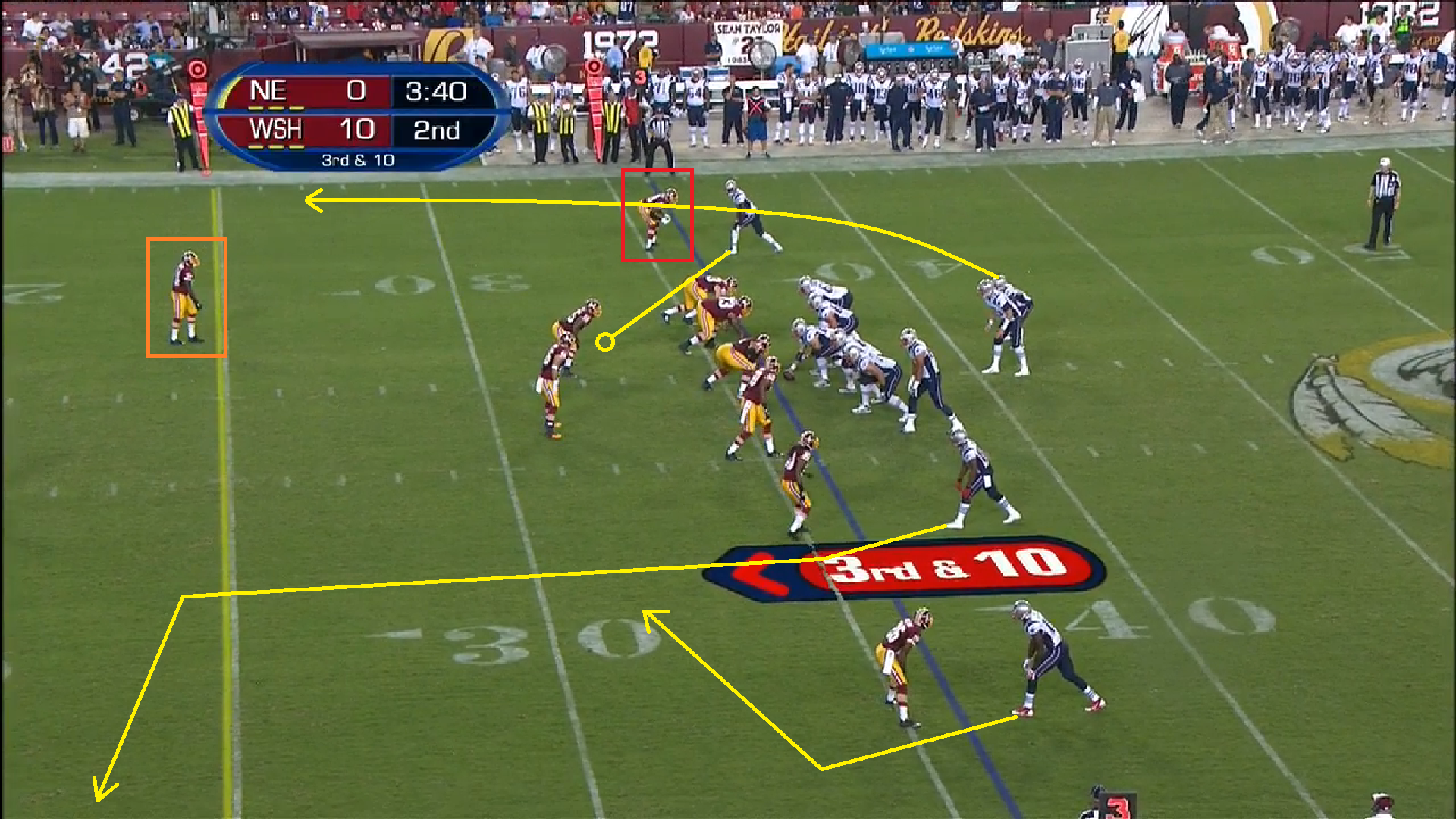 Mallett identifies the corner playing man on his first read and immediately starts to deliver the ball to Finch. If anyone has the arm to get the ball to the sideline before the safety can undercut the route, it is Ryan Mallett. 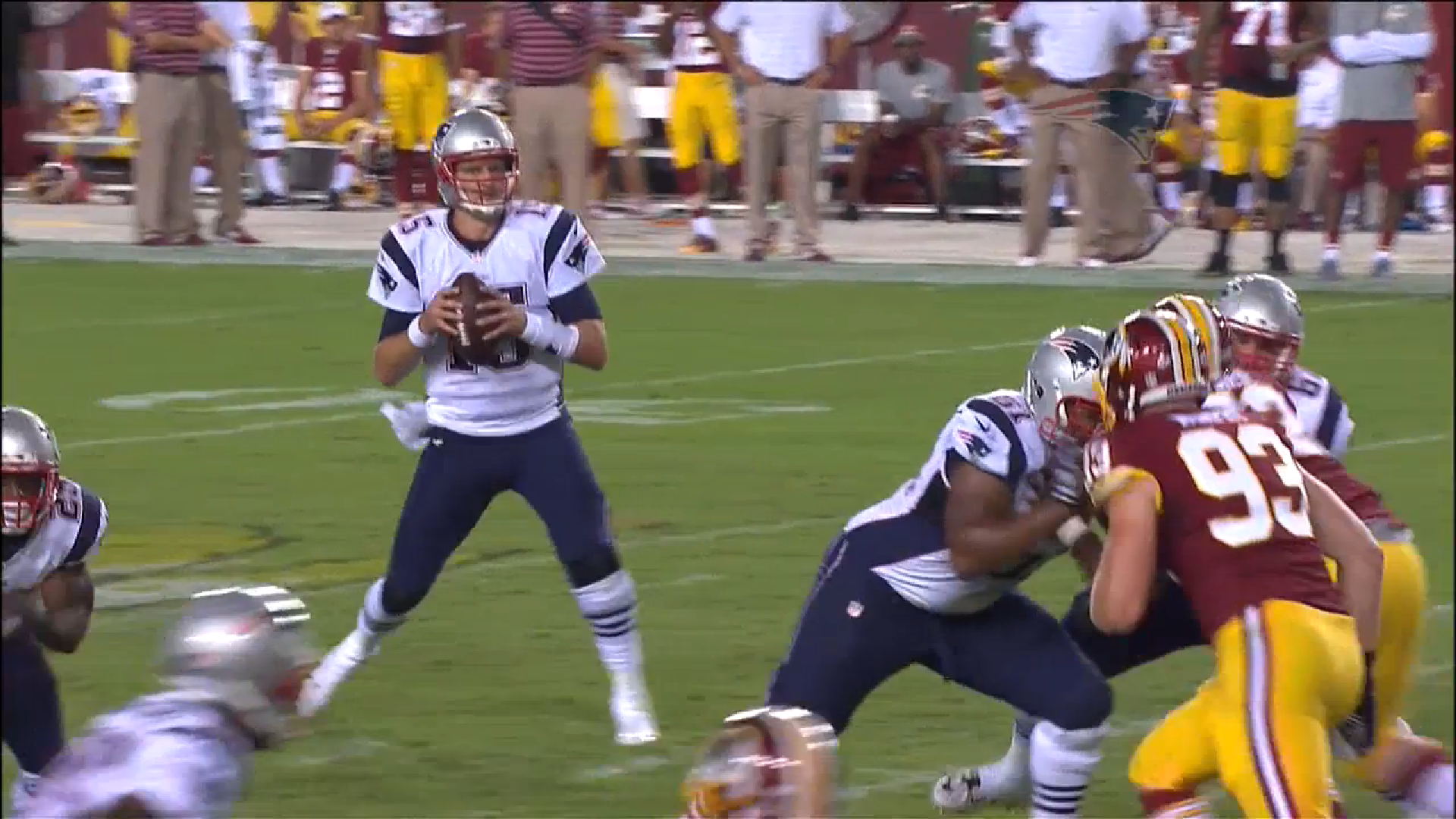 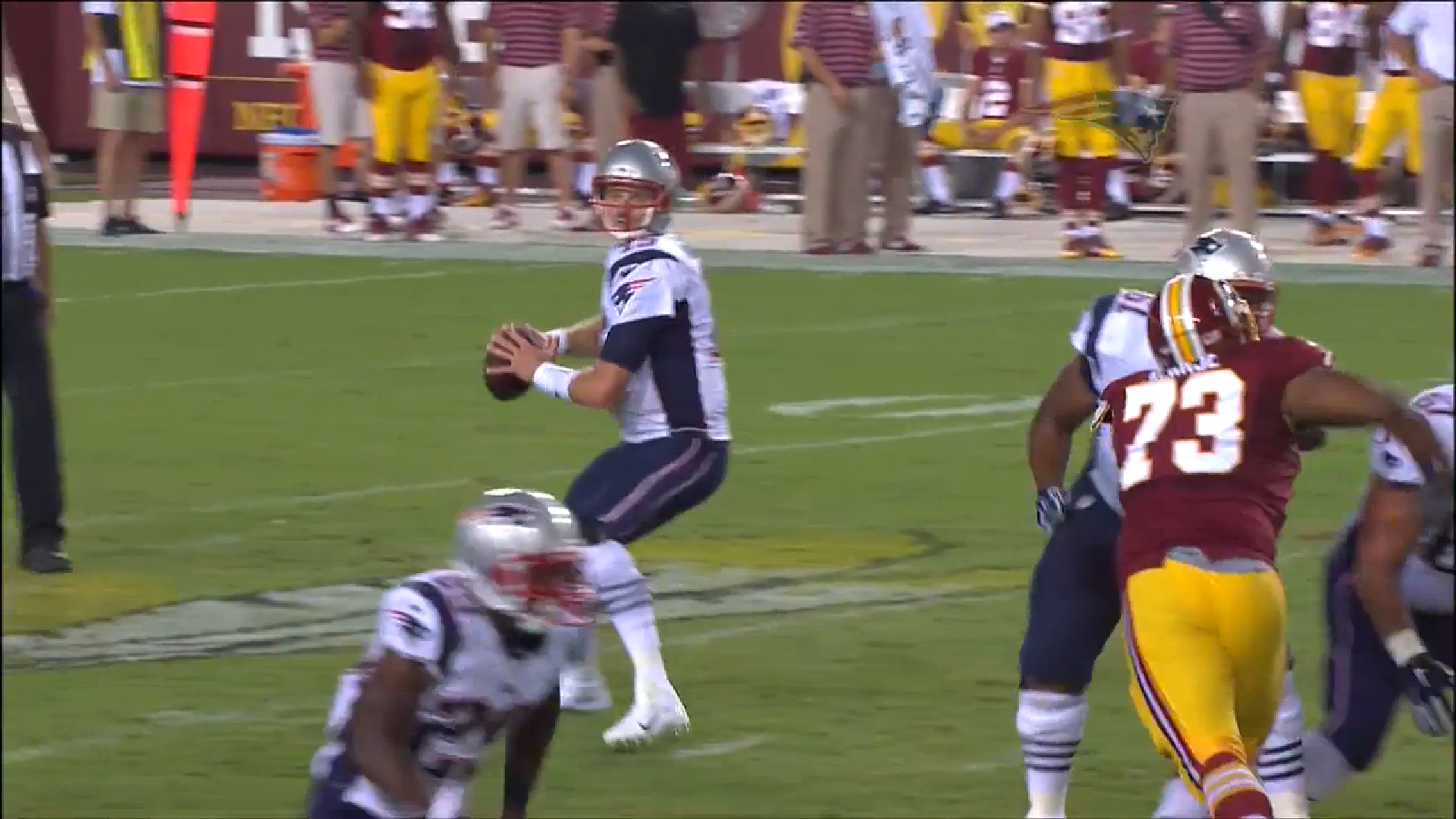 Unfortunately for the Patriots, Finch never turns around and the ball bounces harmlessly off his left arm. Had he made the catch, it would have been a sure touchdown and put New England back in the game. Just as a fade to the end zone is a ball that Mallett can expect Andre Johnson to catch, he can expect Arian Foster to have his head turned on a wheel route. One can never have too many trustworthy weapons. 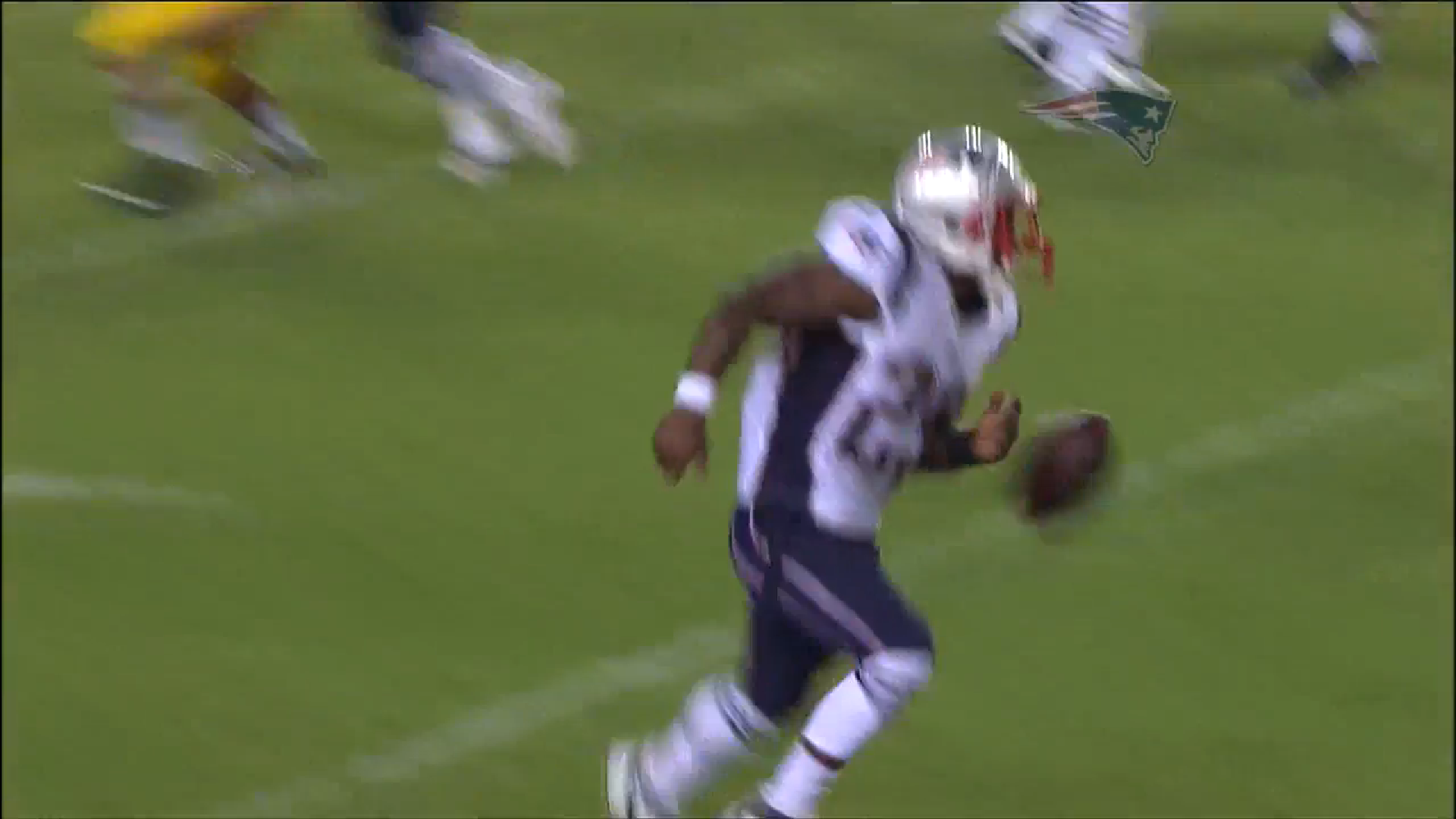 In addition to dropped passes, Mallett was the victim of his receivers running poor routes, or in some cases where routes are altered based on coverages, running the wrong route entirely. Out of the fourteen incompletions that Mallett threw against Washington and Philadelphia, six of them were due to receivers dropping passes or running bad routes.

For instance, Mallett threw this pass to Brandon LaFell outside the hash because he was matched up on a linebacker with inside leverage. Rather than running a "return route" or "whip route" back towards the sideline based on the coverage read of the inside shaded backer, LaFell sat his route down at the hashes and was out of position to make the catch. Mallett’s release caused the ball to dip a little bit, but had LaFell run his route correctly, this would have been catchable for a first down conversion on third and short.

Mallett was visibly upset with Josh Boyce after he opted to run a dig over the middle against an inside leveraged defender rather than altering his stem to a seam route between the two deep safeties. Again, if Boyce ran the correct route, this should have been a huge gain.

Despite being handicapped by a subpar stable of weapons, Mallett was not entirely blameless for every incompletion. Out of the fourteen aforementioned incomplete passes, four of them were the direct result of a poor throw from Mallett. Based on studying the mechanics of Mallett’s release on these four "bad balls", it seems as though he has some intermittent struggles controlling his release point when not allowed to step into the throw. When Mallett is unable to drive through his hips and let his full-body muscle memory take over, he appears to have trouble finding a comfortable release point. That is to say, when having to throw off-platform, mechanically unorthodox passes with only his arm to control trajectory, he has had noticeable issues with ball placement.

Mallett is by no means an inaccurate passer by nature – at least not based on this small sample size of preseason football – but it is a weakness that Bill O’Brien must continue to refine as Mallett progresses in his career. For a better look, keep a close eye on Mallett’s front foot on the following three passes. Notice how Mallett is not able to take a big enough step to truly drive off the front foot.  As a result, his release point is altered, generally for the worse.

Despite these slight mechanical flaws, however, I believe that Ryan Mallett is one playbook away from being the next starting Houston Texans quarterback. Ryan Fitzpatrick does not have his arm, Tom Savage does not have his decision-making skills, and Case Keenum did not have his...well, anything. As soon as Mallett re-acclimates himself to the Bill O’Brien offense – and assuming that Fitzpatrick hits a big enough rough patch to warrant a change – this job should be his for the taking. With any luck, Mallett will not let go of it for a long, long time.