The first overall pick in the 2014 NFL Draft will be sidelined after suffering a torn lateral meniscus in the second quarter of the Texans' season opener in Houston yesterday. After undergoing surgery today, he could be out anywhere from 3-6 weeks to the entire season. Read more about the possibilities on Battle Red Blog.

After reportedly tearing his meniscus in yesterday's win over Washington, Jadeveon Clowney is undergoing knee surgery this morning.  There are two potential outcomes depending on the procedure: one scenario would have him back in 3-6 weeks, but the other would take 4-6 months to recover, thus ending his rookie season on Injured Reserve.

Dr Kenneth R. First joined CBS Houston - Sports Radio 610 this morning.  While he is not the Texans' team doctor, he is a very experienced orthopedic surgeon for the Sports Medicine Institute.  In his interview on the air, Dr. First shared the details of the common approaches taken for a meniscus tear and the long-term expectations for recovering from this type of injury.

"There are two options," said independent Houston orthopedist Dr. Kenneth First on "In The Loop" on Sports Radio 610 in Monday. "You can either repair it. Or you can remove the torn piece."

Doctors will decide what to do based on a few factors, First said, including the type of tear, the location of the tear, the blood supply near the tear and what kind of shape the torn piece is in.

"Obviously if it’s shredded, if it looks like Hamburger Helper so to speak, that’s coming out," First said.

"It will all come down to what the doctors do in surgery," First said.

"Repair, I think he’s done for the season."

If the meniscus is torn badly, it may need to be stitched together to properly repair it.  The recovery time from this type of procedure is generally 4 - 6 months, which would obviously end the 2014 season prematurely for Clowney.  While that would be devastating news for the Texans' number one overall pick and the fans who hope to see this potential "generational talent" on the field this year, it does provide perhaps a better long-term scenario health-wise for the athlete-patient by keeping more healthy cushioning material in the knee.  The limited blood supply to this area of the knee is the reason the recovery is so lengthy.  Coincidentally, this is the procedure that was used on Texans' NT Louis Nix III, ending his senior year at Notre Dame.

If the tear is minor, it is possible to trim and remove the torn portion and polish the damaged area to try and prevent additional tearing of the meniscus.  This option provides a quicker recovery, allowing an athlete to return to service within 3-6 weeks in most cases.  While this might sound like the "good news" fans want to hear, it may also come with the caveat that it "could" introduce other issues for the patient.  By removing this cushioning material from the knee, there is a higher risk of bone-on-bone contact, which can accelerate degenerative issues like arthritis.  This is the procedure that was used on Nix just prior to Texans' Training Camp this summer.

The second procedure has helped Nix a lot, First said.

"You can see where Nix has been able to come back," First said. "He’s not 100 percent in terms of his playing ability, but he is back playing. And that was only 3-4 weeks from the date of his surgery."

If the knee progresses further into a degenerative state, a microfracture procedure may be considered, which is what former Texans' offensive tackle Brennan Williams underwent last year.  That surgical procedure creates tiny fractures in the bone, which stimulate increased blood response so the body can attempt to generate material similar to the meniscus.  The material generated from a microfracture procedure does not have the same high quality as meniscus, and often leads to a premature end of a professional athlete's career in most sports, as was the case for Brennen Williams. 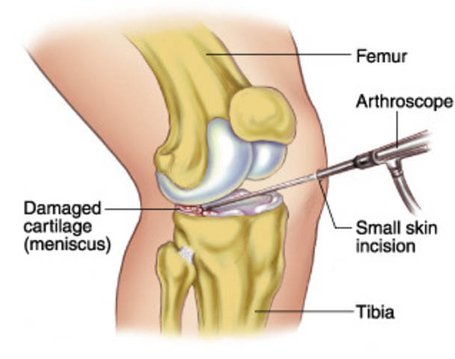 We should know more later today, assuming the Texans provide any post-surgical updates.  Dr. First did point out that perhaps the fact that they scheduled surgery so quickly is an indication that the MRI showed a minimal tear, and that a removal procedure is all that would be necessary to get Clowney back in action as fast as possible.  That's an optimistic possibility for short-term prognosis.  Let's hope it is also the best long-term approach for a player we expect to be a franchise pillar of the Texans for a decade or more.