The Houston Texans began a new era with Coach Bill O'Brien, and Capt Ron chronicles the season opener against the Redskins. The Captain's Log is back! 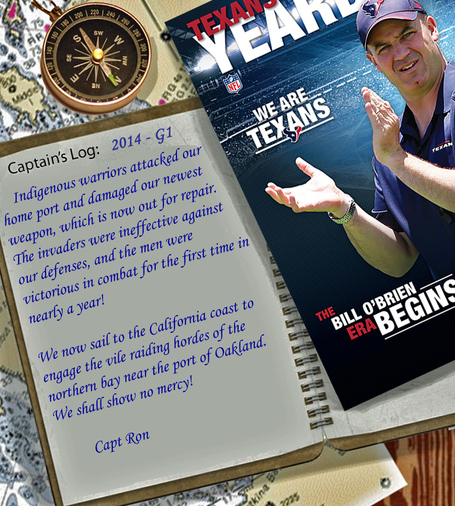 How about that, friends?  Football has returned, and your Houston Texans start the season 1-0!  Welcome back to this weekly series where we recap the latest game and attempt to entertain with some random pop-culture and other odd bits.

Given the fact that this is a complete reboot of offensive and defensive systems, I'm not going to be too picky about the sloppiness as these players and units get up to speed.  I figured we were in for a rough day coming fresh out of Training Camp, and there were certainly more positives than negatives.  The special teams were good enough to attract MDC back into action, which is some of the best news of the year.

If anything, I'm still nervous about Ryan Fitzpatrick, but he didn't turn the ball over, so we have that going for us.  The offensive line looked shaky at first, but finally settled down.  That unit should continue to improve throughout the next few games.  The run defense also looked suspect, but as Brian Cushing knocks off the rust, things should tighten up to meet our expectations.  One big surprise was the emergence of WR and return specialist Damaris Johnson (#13 in your programs).  Only a week after Johnson was claimed off waivers from Philadelphia, that depth chart move seemed to come out of nowhere, with DeVier Posey listed as inactive and Keshawn Martin a non-factor in the game.  We will follow this development closely, but it appears that O'Brien was indeed keeping some cards close to his vest in game planning.

The usual stars jumped out, with J.J. Watt showing the world he's still underpaid while Arian Foster, 'Dre and NUK led the way on offense.  Brooks Reed may have had the best game of his career with excellent edge technique in a scheme that seems to be custom-fit to his strengths.  The staff member I had the most excitement for in the offseason was linebacker coach Mike Vrabel, and he has already made an impact with marked performance improvement for Reed as well as Whitney Mercilus.

We have a long season ahead, but the first game is in the bag for a giant "W."  Go Texans!

The Titans dominated the Chiefs 26-10.  Next Sunday, they host the Cowboys in Nashville.  It's worth noting that Dallas was crushed in spectacularly embarrassing fashion in their season opener at home, where a majority of fans in attendance were wearing 49ers gear:

This is a picture of a Dallas Cowboys home game. http://t.co/I5Os6xiu6U pic.twitter.com/FZ3xmgTxap

The Jaguars started the day off with a 17 point lead, but then surrendered 34 unanswered points to the Eagles on the road in Philly.  The Jags remain on the road and face the Washington Redskins next week.

"I'm a doctor, not a field turf technician!"

Obviously the big news is the unfortunate knee injury to the Texans' first overall pick, as rookie Jadeveon Clowney tore his lateral meniscus in the second quarter of his first NFL game.  He underwent surgery this morning and is expected to miss anywhere from four to six weeks.  In the short time Clowney has been with the team, he has already had surgery to repair a sports hernia and suffered a concussion in Training Camp while up in Denver before tearing his meniscus.  Let's hope he has punched his quota for injuries in 2014 and the rest is smooth sailing.

We'll update this section with any additional injury news that gets reported.

J.J. Watt was rewarded with a $100M contract just before the regular season began, and he blew the door open in the season opener with yet another performance worthy of the record books.

1 sack, although intentional grounding by RG3 "stole" another.

"The only thing he didn’t do was intercept a pass and run it back," owner Bob McNair said.

Andre Johnson was in mid-season form with 6 receptions for 93 yards for an average of 15.5 yards per catch.

D.J. Swearinger had a big game with the first sack of his NFL career and the first official team sack of 2014.  He also had 8 tackles, 2 for a loss, 2 QB hurries and 1 forced fumble.

Arian Foster rushed for 103 yards on 27 carries and had 2 receptions for 17 yards.

DeAndre Hopkins collected 4 receptions for 89 yards and a touchdown.

Brooks Reed had an excellent day: 1 sack, 5 tackles with 1 for a loss, and 3 QB hurries.

Alfred Blue blocked a punt and returned it for a touchdown.

"I will not succumb to your pelvic sorcery!"

We'll overlook any mistakes since Houston won for the first time in almost a year and won the turnover battle.  Foster needs to be more careful though, as his fumble could have been more costly.

The officials really didn't do a good job at all.  They failed to call holding numerous times on the Redskins' offensive line, who all but draped locked arms around J.J. Watt's neck on just about every play.  The refs also blew a personal foul on D.J. Swearinger for hitting RG3 when the film clearly showed it was a clean hit.  Another bad call was the illegal contact assessed on Kareem Jackson when the receiver drove off the ball and into Kareem for incidental contact; this negated a Whitney Mercilus sack.

I honestly don't understand how an almost $8 billion sports league can't get better consistency in officiating.

"A lot of people have been trying to kill me over the years. I'm not going to be brought down by a tree and a talking raccoon."

Next up, the Texans head to Oakland to play the Raiders on Sunday, September 14th at 3:25 p.m. CDT.