Jadeveon Clowney Injury: Is The Field At NRG Stadium To Blame?

Reports are surfacing that Jadeveon Clowney stepped into "one of the holes" in the field at NRG Stadium, which in turn caused his knee injury. How many more players need to get hurt on the surface before the Texans do something about it?

Share All sharing options for: Jadeveon Clowney Injury: Is The Field At NRG Stadium To Blame?

It appears that another player, this time the first overall pick in the 2014 NFL Draft, may have fallen victim to that atrocious checkerboard landscape over on Kirby.

When will Bob McNair realize that this "grass squares" concept is not a safe surface for playing football?  How many players need to get injured before the Texans abandon that garbage and install a more predictable surface like Field Turf?

Just off the top of my head, he following players have suffered injury from the Texans' home field over the years:

Wes Welker - Suffered an ACL injury when he hit a seam between two pallets.

Brian Cushing - Knee and hamstring injury when he hit a "floppy" corner.

Andre Johnson - Slipped in stride and pulled a hamstring in 2011; missed SEVEN games.

Brett Hartmann - Completely destroyed his ACL while running after a punt, ending his career.

After Welker got hurt a few years ago, Bill Belichick said the following in an article by PFT in 2010:

"The turf down there is terrible," Belichick said on WEEI. "It’s terrible. It’s just inconsistent. It’s all the little trays of grass and some of them are soft and some of them are firm and they don’t all fit well together, those seams . . . some of it feels like a sponge, some of it feels real firm and hard like the Miami surface. One step you’re on one, the other step you’re on another. I really think it’s one of the worst fields I’ve seen."

Belichick said he thinks the league needs to demand safe playing surfaces in every stadium.

"For the level of play we have in the National Football League, I think consistency on the field would be priority No. 1," Belichick said. "We talk about players’ safety, about hits and all that and that’s certainly an area that should always be addressed. There’s nothing more important than player safety. To me, player safety starts on the surface that we play on."

We've reached the point that this remark is quite possibly true and not a harmless joke:

If the Texans turf were a person, it would easily be the most fined person in NFL history.

Here is a time-lapse video of how they install the grass squares for a game:

How many more times do we need to see images like this?!!! 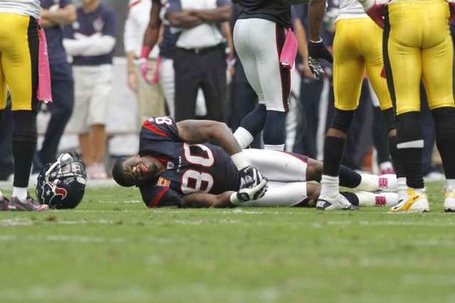 Enough is enough!  Get that field replaced with a consistent surface that players can trust.  How do you feel knowing there is a chance that the Texans' first overall draft pick may have just sustained an injury due to the field at NRG Stadium?