2DH: Your Dreams Were Your Ticket Out

The Two-Day Hangover returns for 2014 with Gabe Kaplan references, homemade bacon, meat-related science, the socioeconomic status of a cartoon character, TV ad annoyances, and a bunch of numbers. It's good to be home.

Share All sharing options for: 2DH: Your Dreams Were Your Ticket Out

I'm pretty sure Tim is a witch.

I say that because he somehow managed to email me last week, asking if I would be interested in bringing back the Two-Day Hangover, on the very day that I'd found myself wondering that same thing while I was in the shower.  It was literally the first time I'd considered it in over a year, and somehow this Irish warlock knew it and pounced.  He's evil, that one.

ANYWAY...I was going to write a sappy, "I missed you guys" intro, but then I remembered two things: 1. I would be lying to most of you.  2. I can sum up the entirety of our relationship and this return through the theme song to Welcome Back, Kotter.

Number of receiving yards Andre Johnson needs to end this season with to definitely be in the top 10 all time in that category. (The number would be as low as 1,117 if Reggie Wayne got injured and didn’t move into the top 10 as well.) His 93-yard day on Sunday makes the remaining number 1,146, because math.

Players over 30 years old who have a career average of over 80 receiving yards per game. His name is Andre Johnson.

I realize that I am often too literal, which causes me to pick apart movies and TV shows and even songs for inconsistencies and plot holes. I know this about myself, and I generally embrace it, because I’m also a stubborn person and something of a contrarian. (My kids do it, too; my wife puts up with a LOT, folks.) That said, there’s a difference between being too literal and just expecting a commercial (or show or whatever) to make sense internally. Which is why this commercial has been bugging me for over a year:

Matt Damon's voiceover tells us, "This is Joe Woods' first day of work, and his new boss told him two things: cook what you love, and save your money." Fine. Whatever. Boss sounds like a reasonable guy with some good advice.

Yet, the very next sentence says, "Joe doesn’t know it yet, but he’ll work his way up from busser, to waiter, to chef." If his first day of work is as a busser, why would his boss tell him to "cook what [he] love[s]"? Even if his boss is as friendly and full of advice as Hank Scorpio, shouldn’t he say something more like, "clear the tables in a manner that gives you a sense of personal fulfillment"[1]?

It can't be that he’s worked his way up to chef, and his boss is just now telling him this on the heels of his promotion: the commercial makes clear that this is his "new boss" and that, at this moment, Joe has no idea that he will work his way up. (Along those same lines, why does the commercial start with Joe cooking when this is his first day?)

Maybe it's just me, but I kind of expect the people who want me to invest my money long term to pay attention to both details and the generally linear manner in which time appears to pass.

NFL teams against whom the Texans are .500 all-time or better, including Washington following Sunday's win.  This total is actually higher than I expected when I went to look it up.  So...yay?

Career 100-yard rushing games by Arian Foster, putting him only 52 behind Emmitt Smith for first all time.

How did Wile E. Coyote afford all that stuff that he ordered from Acme? He did not seem to have any gainful employment – remember, the Sheepdog cartoons were Ralph Wolf and Sam Sheepdog, not Wile E. Coyote – and even in the 1950s and 1960s, mail-order anvils, dynamite, and the like cost money.  Wile seemed to just walk the earth like Kane in Kung Fu, and, as Vincent Vega explained, with a job and legal tender, you're nothing but a bum.

Sacks needed by J.J. Watt to pass Mario Williams for most in team history.

Career sacks as a Texan that anyone needs to pass Travis Johnson on the team’s leaderboard.

Concussed, possibly dead, QBs that anyone needs to taunt while in a Texans uniform to pass Travis Johnson on that list. 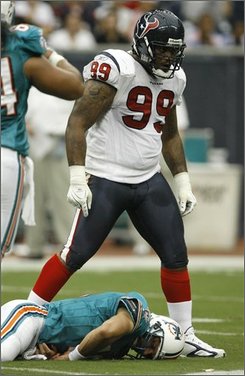 Receiving TDs Garrett Graham needs to pass Joel Dreessen for fifth all time among Texans. Which is amazingly depressing.

Interceptions needed by Brian Cushing to do the same thing.

My favorite Ryan Mallett highlight ever:

This year, rather than continue to delve into the minutia of regional BBQ, which we covered pretty extensively in 2012, we are going a step further and focusing on some advanced topics in cured/slow-cooked/otherwise-awesome forms of carnivorous pleasure. Which sounds dirty, but (generally) isn’t. This week’s topic: Bacon. I’m going to let you all in on a wonderful, delicious secret: it is really, really easy to make homemade bacon. And, while it might be hard to believe, given how great bacon already is, homemade bacon is one of the myriad things that is actually better when made at home.[3]

Step 1: Acquire a pork belly. Ideally, get yourself something between 10 and 15 lbs. Local farms, especially organic/free-range types, have great pork bellies at reasonable prices.

Step 2: Using a very sharp knife, and starting from one corner of the pork belly, remove the skin, leaving as much fat/meat behind as possible. If your knife is sharp, this shouldn’t be particularly difficult, so just take your time and do it right.

Step 3: Cut the pork belly into vaguely bacon-slab-sized pieces, around 2 lbs. each.

Step 4: Mix the following ingredients. The amounts are based on measurements for one two-pound slab. You might be tempted to make one batch of the brine based on the total weight of your pork belly. Don’t do that, unless you’ve already cut it into slabs and every slab is exactly the same weight.

Step 5: Place each slab in a large Ziploc bag and dump the brine in there with it. Carefully remove as much air from the bag as possible, then play with your meat for a while, tossing it around in the bag and trying to get as even a distribution of the pepper and flavors as possible. These slabs will release their own liquid every day or two, so the turning and squishing around is necessary to make sure the brine is in contact with the meat.

Step 7: Place all of the slabs in fridge. Here’s where the waiting game begins. You are going to let these slabs cure in the brine for at least 5 (ideally 7) days. Each day, however, you are going to take turn each slab over at least once, just to keep the distribution of the salts, pepper, and flavors as even as possible.

Step 8: Hooray, it’s a week later! Take the slabs out of the fridge and out of their ziplocs, rinse the slabs, and pat them dry with a towel. If you want to do peppered bacon, now is when you will liberally apply pepper to the slab (post rinsing). Place on a plate or cutting board and leave on the counter while you build your fire. It’s time to smoke these suckers. 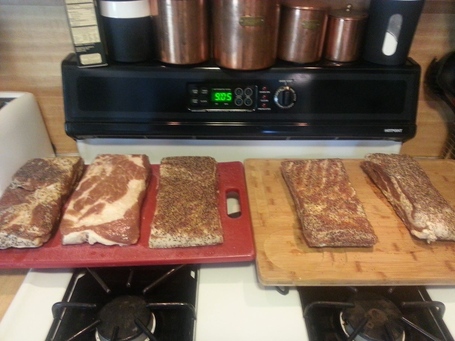 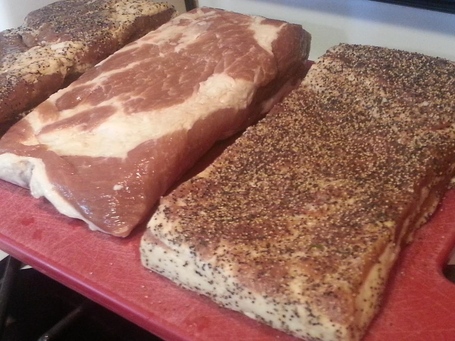 Step 9: Build a fire in your smoker (or, if using a grill, get set up for two-zone cooking so you can use indirect heat). We’re shooting for 225 degrees.

Step 10: Put the slabs on the smoker. A two-pound slab will take about 2 hours to reach 150 internal, which is all we want, since the nasties in the raw pork will be dead then.

Step 11: When the slabs hit 150 in the middle, remove them from the smoker, let them rest for about 30 minutes at room temp, then wrap in plastic wrap and place in the fridge for at least two hours (preferably longer). Cold bacon is much easier to slice than warm bacon. 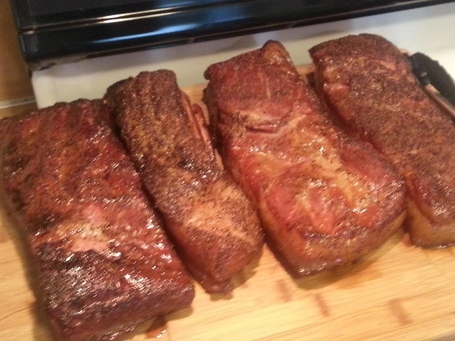 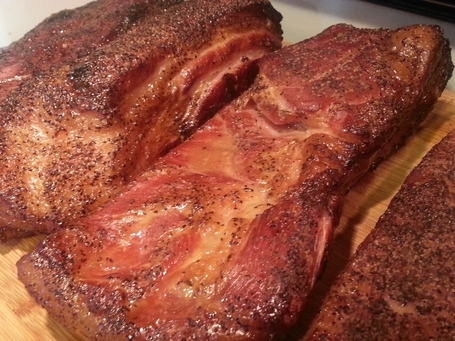 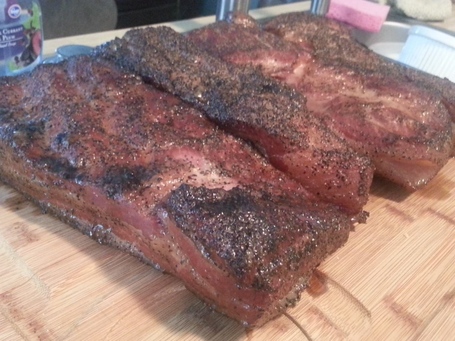 Step 12: Once the bacon is chilled enough to slice, use a long knife or a meat slicer and cut slices to your desired thickness. Now cook it and eat it. 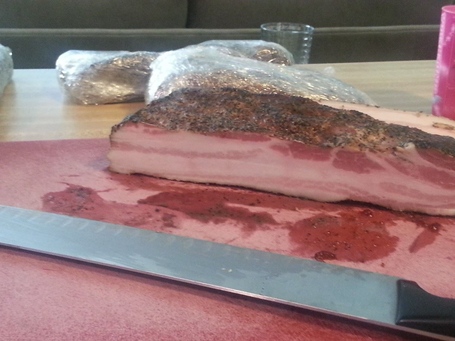 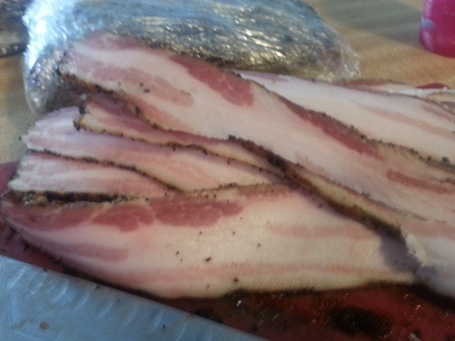 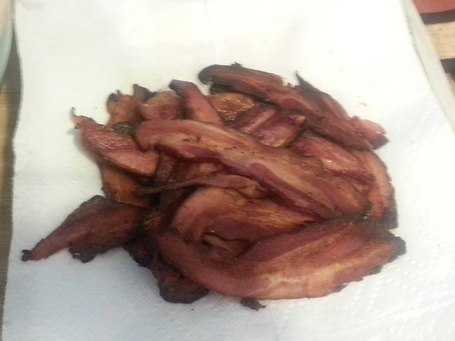 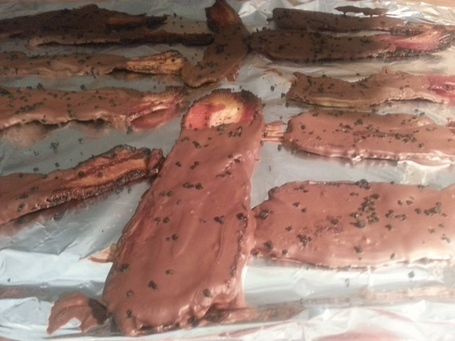 As long as we’re talking meat science, bacon is as good of a choice as any to discuss a common misconception: that meat should be allowed to dry before you put it on the smoker. Many bacon recipes will tell you to rinse the slab, pat it completely dry, and let it sit uncovered in the fridge for another day to dry thoroughly and form a pellicle. (A pellicle is denatured proteins and other compounds that collect on the surface of the meat and form a kind of "skin.")

The idea is that this pellicle allows smoke to adhere better. This is wrong.

Picture how your smoker works in terms of airflow. Assuming you have a standard offset smoker, smoke comes into it at one end, passes along the length of the cook chamber, and leaves out the other end. (If you have a reverse-flow smoker, the idea is the same, the path is just longer.)

The meat in your smoker is like a car in a (very low-speed) wind tunnel. It sits, motionless[4], while the air and smoke pass over it. But think of pictures of cars in wind tunnels: 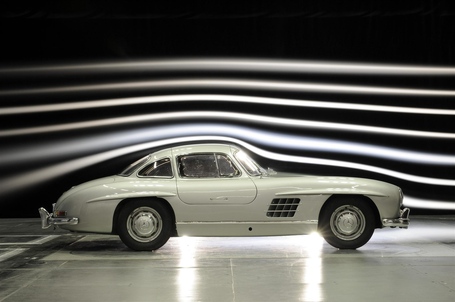 See that little gap between the smoke and the surface of the car? In fluid-dynamics terms, that is a boundary layer. Well, the same thing is going in the vicinity immediately around your slab in the smoker – there is a boundary layer, where the air barely moves, and it forces most of the smoke over the meat. Given how light the individual particles in smoke are, they are easily deflected over the boundary layer, and only a very small number (relatively speaking) will actually come in contact with the meat.

A dry smoke particle hitting a dry meat surface has very little to make it stick to the meat, while a wet meat surface will grab those particles and hold them. Additionally, when you’re talking about a meat like pork or beef (rather than say, salmon, which you should be cold-smoking anyway), the pellicle is not necessary to help smoke adhere. As the outside of the meat warms in the smoker, surface fat will start to render (130ish for white pork fat) and the meat will begin to push juices to the surface (collagen in the meat pushes myoglobin to the surface around 140 degrees).

So, even if you start with a dry piece of meat, the surface will be wet soon enough, and that is when it will begin to efficiently take on smoke flavor. There’s also a thermodynamic thing at play with wet vs. dry surfaces and smoke absorption, but we’re pretty far off the rails here, so we’ll save that for another week.

[1] Also, "on your way out if you want to kill somebody it would help me a lot."

[3] Things that are NOT better when homemade: condoms, penicillin, Sprite.

[4] Assuming you aren’t smoking something without killing it first, you psycho.