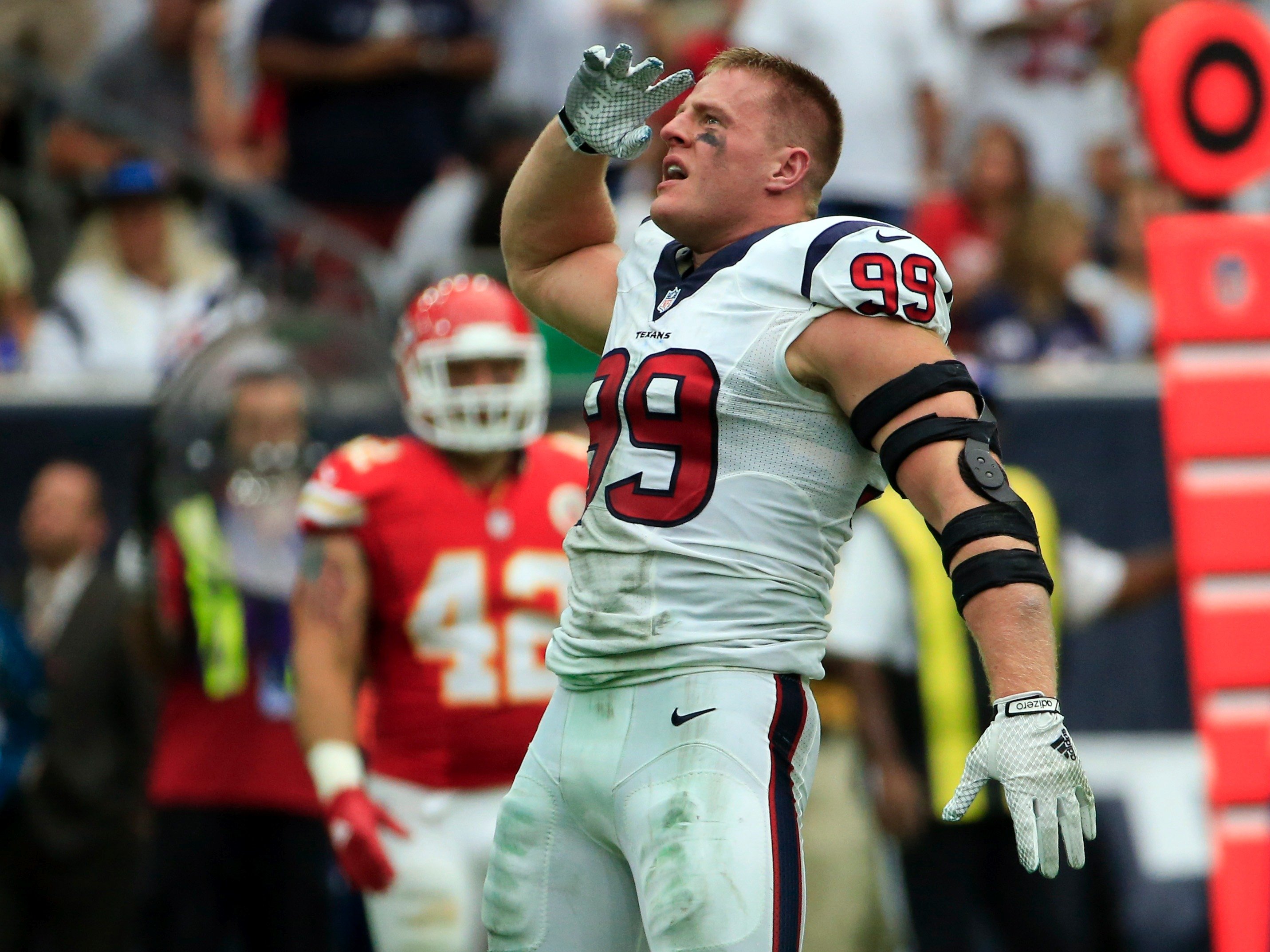 "Am I done?" J.J. Watt asked himself in a Players’ Tribune piece last November, reflecting on his career after a staph infection nearly cost him his leg.

The Houston Texans’ All-Pro defensive lineman, embattled with injuries over the last two years, divulged that the infection was the most frightening health issue he had ever faced.

"One Friday night last season, I noticed some weird bumps on my knee," Watt wrote, "I thought it was a rash, so I went and asked our trainer if he had any cream. He looked at my knee and said, ‘That looks really bad. We have to get you to the hospital right now.’"

The skin infection Watt experienced is known as cellulitis.

Cellulitis most commonly affects the lower legs. It usually only affects the skin, but if untreated, can spread to the underlying tissues, nearby lymph nodes, or the bloodstream.

"When we suspect cellulitis, usually the main characteristics we look for are warmth, swelling, and tenderness. When we find these changes, it is very important to diagnose cellulitis early and treat it before we see serious complications."

The infection is usually caused by staphylococcus ("staph") or streptococcus bacteria. Watt developed a potentially serious form of cellulitis due to a variant of staphylococcus known as methicillin-resistant Staphylococcus aureus (MRSA).

S. aureus is widespread in the environment and can even live on the skin or inside the nose without causing illness. In fact, approximately one in every three individuals is colonized with staphylococcus, and about two of every hundred carry MRSA. MRSA is the leading cause of skin and soft tissue infections in the U.S. and is especially common in football players.

"We often think of MRSA as a ‘superbug,’ Dao describes. "One important public health problem we currently face is overuse of antibiotics, which leads to bacterial resistance. MRSA is a big problem because we usually like to try the penicillin family of antibiotics first but now oftentimes we have to reach for the ‘big guns’ instead."

MRSA cellulitis is becoming more prevalent in individuals without links to hospitals. Such "community-acquired" MRSA differs from the more common hospital-acquired MRSA in that it is resistant to several antibiotic agents and produces more severe lesions, such as skin abscesses.

Intravenous antibiotics are frequently used to treat MRSA cellulitis. But when the bacteria have spread, multiple surgeries or even amputation may be required to clear out the infected tissue.

Watt went on to receive treatment and actually played in a game against the Jacksonville Jaguars while receiving antibiotics. He had been listed as questionable with an illness.

"I thought [the trainer] was joking at first," Watt reflected. "But then I could see in his face that he was serious and actually a bit panicked. As it turned out, he saved me in a big way. At the hospital, they immediately put me on three hours of the strongest antibiotic IVs. I went straight from the hospital to the team plane and we flew to Jacksonville. Once we landed, there were two more hours of antibiotics that night and two more the next morning before the game. The medicine had completely drained me, but I played—and we won."

"I remember walking into the locker room after the game and just collapsing on the training table. My body was completely shot, with nothing left to give. As the trainers hooked me up to an IV, one of the guys walking past joked, ‘You alive?’"

Later that day on the flight back to Houston, Watt learned how serious MRSA cellulitis can be.

"One of the team doctors told me that if our trainer hadn’t recognized the problem so quickly, I could have lost my leg."

Dao agrees, acknowledging that it is critical to diagnose cellulitis early.

"We always want to catch the infection sooner rather than later, no matter who the patient is or what their comorbidities are," Dao states. "We do not want to miss it or misdiagnose it."

"That was my 2015 season. Believe it or not, the scariest was probably the staph infection."

MRSA cellulitis is hardly new to National Football League (NFL) locker rooms. In 2015, New York Giants tight end Daniel Fells nearly had his foot amputated because of MRSA cellulitis. Physicians were able to avoid amputating Fells’ foot, but the infection ended his career prematurely, as it has for many other NFL players in recent years.

In 2013, for example, three members of the Tampa Bay Buccaneers suffered from MRSA cellulitis: offensive guard Carl Nicks, cornerback Johnthan Banks, and kicker Lawrence Tynes. Tynes was the most vocal about his bout of MRSA, asserting that it forced his retirement. He later filed a lawsuit against the team, citing unsanitary conditions and seeking $20 million.

Both sides eventually reached a settlement in February 2017, although the terms were not disclosed. Tynes’ settlement came nearly three years after the Bucs awarded Nicks $3 million as part of a separate injury settlement.

Tynes is correct in thinking that such hazards might have facilitated transmission of MRSA.

"In an athletic setting, we usually think about equipment that is not being cleaned often or is harder to clean routinely," says Dao.

"The large rosters and close quarters of locker rooms, with a high concentration of athletes together, make transmission easy. It is the right environment for a higher rate of infection."

They also identified skin abrasions as a primary culprit. In fact, all eight MRSA skin abscesses developed at sites with underlying abrasions, which were usually left uncovered.

"Cellulitis is usually due to breaks in the skin," Dao notes. "In fact, a common clinical scenario involves athlete’s foot, or tinea pedis, in which overcolonization of the skin with fungi we call dermatophytes can lead to small fissures in the skin, forming a portal of entry for bacteria."

"Bacteria can then enter the skin and travel upwards to cause cellulitis of the lower leg without apparent infection of the foot."

Interestingly, in the study, cellulitis exclusively affected Rams linemen and linebackers, sparing their teammates who line up in the backfield. Indeed, linemen such as Watt, unlike quarterbacks or cornerbacks, experience physical contact on every play. Such frequent contact causes the soft tissue injuries and abrasions that provide ready entry for pathogens such as MRSA.

Dao offers a specific solution to make it easier for players to treat their open wounds.

"We might want to install antibacterial dispensers in NFL locker rooms and gyms, similar to current efforts pushing for sunscreen dispensers in our public parks."

"Team physicians need to be in touch with players," Dao suggests. "They need to educate players that it is okay for them to report boils or swelling, even if it is embarrassing for them. Sometimes we think, ‘They are football players. They are supposed to be strong and healthy.’ But reporting these types of lesions does not mean they are unsanitary or neglecting their skin."

After the outbreak in Tampa Bay, the NFL launched an Infectious Disease Prevention Program, a partnership with the Duke Infection Control Outreach Network (DICON). The program aims to standardize how teams educate players about hygiene and infections, while also instituting league-wide cleaning protocols and a unified response plan geared toward preventing skin, fungal, and gastrointestinal infections.

DICON has worked with the NFL and the NFL Players Association to create a comprehensive infection prevention manual that has been distributed to all 32 NFL teams. Its policies, which include installing hand disinfectant gel stations, mandating post-practice showers, and discouraging cosmetic body shaving, have already been implemented by many teams.

These changes could go a long way in preventing other players from experiencing the career-threatening struggle that Watt and others did.

"There were some very rough days," Watt admitted. "When the thing that you love is taken away from you and the game that you’re so passionate about and you put so much work towards. When that’s taken away from you, that’s when you truly realize how much it means to you and how special it is."

Watt is glad to be finally healthy, and with a renewed love for the game, he eagerly awaits his return to the gridiron for the upcoming season.

"There’s a brand new passion. There’s a brand new excitement level that I haven’t had in a long time…I can’t wait [to hit somebody]. It’s like having an insatiable appetite that hasn’t been fed in a very, very long time. It’s all pent up and at some point—somebody is going to feel it and that’s going to be fun," Watt laughed.

Dr. Dao is neither involved in the medical care of J.J. Watt nor has access to his personal medical records. His analysis represents speculation based on available information and consults with experts and specialists.