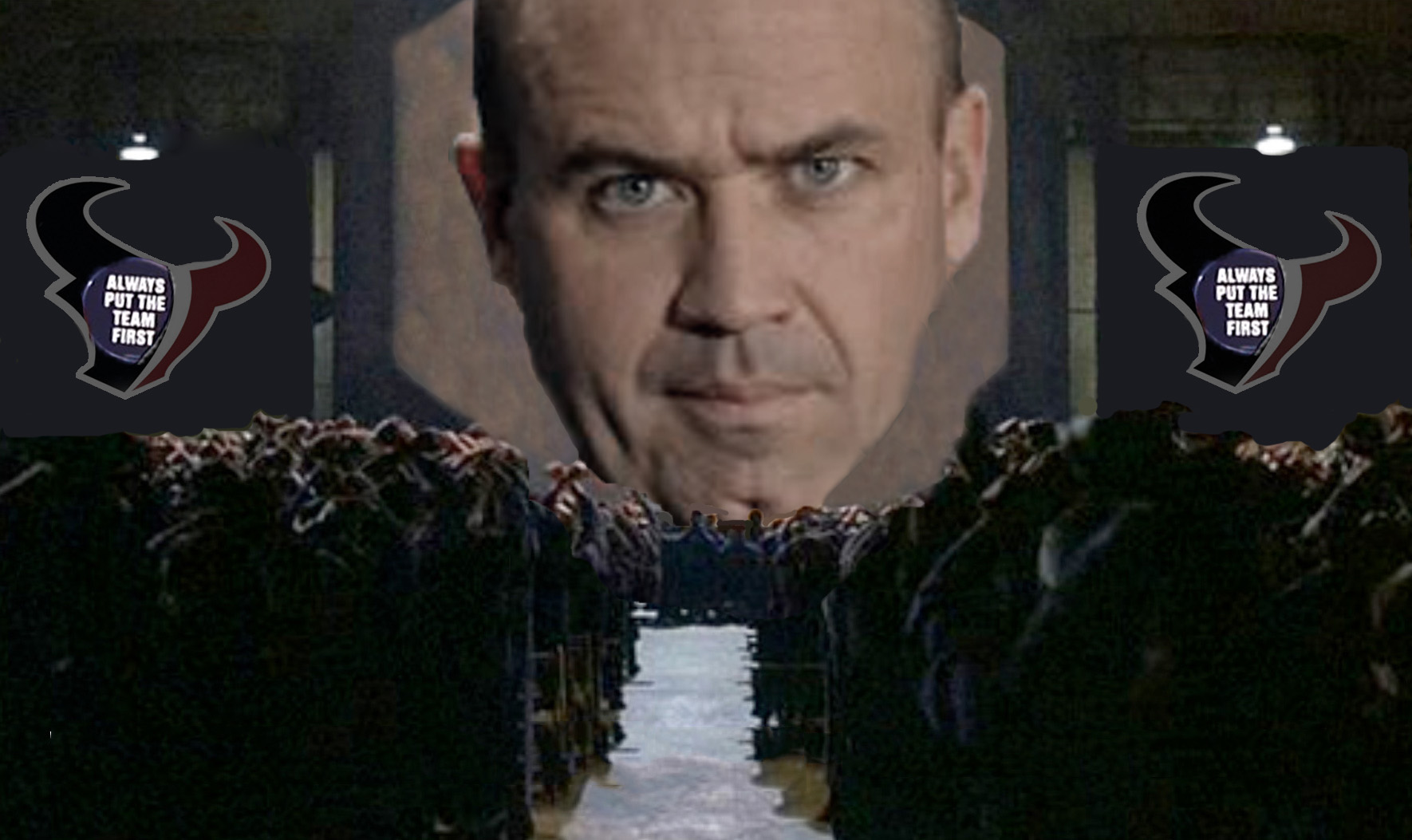 If you want a picture of the future, imagine a Battle Red boot stamping on a human face -- forever.

All rise for the People’s Hymn of Glorious Houston Texans:

Good morrow, comrades! As you may know, our honorable Minister of Information has been temporarily called away on a mission of great importance. Therefore I, Third Deputy Assistant Undersecretary for Newspeak and Truthiness, have taken it upon myself to issue needed proclamations in his stead.

People’s Football Team of Texas, our beloved Houston Texans, return to Motherland to laugh, drink, and be merry after extended preseason contest against wretched and gullible "patriots" of imperialist lesser England. Yes, in his infinite wisdom, Great Leader Bill O'Brien adamantly refused to lower standards of wondrous Texans by allowing first-team players to practice their unmatched skills against such meager and woeful livestock-related competition as Cowherders of Southern Oklahoma or pitiful Horned Sheep, who recently relocated to sprawling soulless refuge on America's western coast intended for vain and the mentally unstable. Nay! Great Leader would never subject players of Texans to such foolishness.

Thus he laughs with great scorn at inquiries levied by compliant national media, who remain wholly unfamiliar with such brilliant, clandestine trickery. In the midst of his press briefing, they contemptuously launched slings and arrows of ignorance toward Great Leader O'Brien as he graciously stooped down to converse with masses, unaware of secret plot set forth (in secret) by O'Brien and People's Hero of Offensive Performance, Field Marshall Deshaun Watson. Please know, brethren, that we at Ministry have been informed (also in secret) that these two men did collectively and selflessly feign incompetence in order to lull our enemies into false sense of security for remainder of this year's campaign. Furthermore, it will soon be announced that Comrade McClain (if that is his real name), longtime writer for official broadsheet truth publication of Mother Houston, will be shipped to Gulag for blatant insubordination.

But let us dwell no longer on past or on secret yet brilliant machinations of Great Leader O'Brien. Instead, we must look toward upcoming contest against eternal enemies, despicable traitors of Northern Alabama, who have been rumored to both consume small children for sustenance and fornicate with their siblings while using illicit hillbilly drugs. All good citizens will agree that such wickedness cannot be tolerated. In truth, comrades, treachery of these already treacherous traitors has now reached even loftier heights of treason, as former Minister of Defense for glorious Houston Texans, Mike "Liter of Men" Vrabel, has become new coach for Northern Alabama after deviously infiltrating and sabotaging Texans from within last season. Verily, it is way of all cowards.

While it has always been (secret) plan of Great Leader O'Brien and Field Marshall Deshaun Watson to set aside masque of feigned incompetence after extended preseason match against imperialist lesser England, such brilliant trickery may not even be necessary to achieve victory in upcoming contest. Indeed, Northern Alabama media reports that after marathon of epic proportions, despicable "Titan" players Marcus Mariota, Delanie Walker, and Taylor Lewan sustained injuries at hands flippers of Sexually Aggressive Aquatic Mammals of New Cuba. In such weakened state, with field marshal duties for upcoming contest possibly relegated to Real American Blaine Gabbert, castoff from Hairballs of Jacksonville, glorious Houston Texans need only arrive and stare scornfully at traitor Vrabel until he forfeits match and shamefully returns to locker room with tail between legs to defeat helpless, inanimate opponents instead.

So take heart, comrades! Nothing have we to fear from such dastardly, backwater vermin, whose now deceased leader, Supreme Ruler of Hades, Kenneth Stanley "Bud" Adams, dared to steal colors and history of glorious Houston Oilers from Motherland where they rightly belong, now and for all time. Is well known that these cowardly inbred traitors fear righteous vengeance from people of Houston through their football team, and would go to great lengths to avoid further embarrassment and domination, as displayed in kitten-stomping they faced during previous season by laughable score of 57-14.

Please note that as lowly Third Deputy Assistant Undersecretary for Newspeak and Truthiness, and relative newcomer to Ministry of Information, I pray that controversial language such as "kitten" may be excused as valid expression of passionate love for People's Football Team of Texas. Many apologies to those who take offense. I merely take guidance from vocabulary of Great Leader O'Brien, who all good citizens should strive to emulate in all aspects of life, including wardrobe, lifestyle choices, clock management, and humble admiration for founder of People's Association of Proletarian Musicians, beloved comrade Rick Ross.