Share All sharing options for: Hair of the Dog (Texans v. Giants):  Fitzcraptick

If you've read BRB at all this season (and if you're tuning in today, it's probably not your first foray), you're well aware that the staff here have had very little confidence in Ryan Fitzpatrick.

Sure, the numbers have been decent, but the actual game play has been uninspiring.  Moreover, the location of his passes have left quite a bit to be desired.

We all believed that it was simply going to be a matter of time before his mediocre quarterback play turned into crap.  His quarterbacking history is simply too long and um... what's the opposite of distinguished?

Well, today was that day.

Oh, yeah.  And the rest of the team sucked too.

Ryan Fitzpatrick throws his first interception as a Texan.

It's taken two games, but it has finally happened.

He throws a few of those 3rd down toss ups, but none have found their way to a defender until today.

I attribute it more to being hit by JPP than a poor throw. It happens, I guess.

I guess the pizza box HoboQB ate out of last night didn't have enough cheese remaining.

In the first quarter, the Texans forced and recovered a fumble inside the five.

How many turnovers have we forced in the red zone now? 4? that's unbelievable.

How many turnovers have we forced in the red zone now? 4? that's unbelievable.

The Giants KUBAR a field goal attempt in the second quarter.

Josh Brown, looking completely unaware with what to do when a snap is missed.  (Hint: NOT what he did.)

It's great to be 2-0 and everything, but the teams we've played have been shockingly kitteny.

On the other side of the ball though: Fitzy is 1-for-4 for 7 yards.

So basically the whole stadium is a dumpster-fire today…

Victor Cruz caps a 9-play 83-yard drive with a TD.

I hate this secondary so kittening much.

And THAT is why Cruz is one of the best. Even good corners like Kareem get toasted.

Cruz just YACed all over Jackson's face again in the slot.

Ryan Fitzpatrick tries to force a pass to Andre Johnson on 3rd and 19 resulting in an interception that was returned to the 2.

I, for one, would be in favor of executing Ryan Fitzpatrick at halftime, just as a motivator.

Vega (right after the play):

They should have executed him at the two-minute warning.

God he sucks so hard when there is pressure.

Right before the snap, I said to LB, "An interception returned for a TD here would not surprise me in the least, because Fitzpatrick is going to try to force something to Andre."

I was two yards from being psychic.

The #HoboQB Experience is rolling.

Can we roll it in front of a bus?

Going for it on 4th and 1 early in the third quarter, Alfred Blue is stopped for a loss of one.

Love the decision to go for it on 4th and one.  HATE the play call.

Yeah especially since they can't move the LOS against this NYG's DL.

I would like to see more passes to the TEs to take advantage of this crappy NYG linebackers.

Wow...we did something right? I'll take it.

Jedi mind-trick from The Beard = touchdown to a Johnson... "D. Johnson," who tries to redeem from earlier mistakes.

It's like the gameplan is now, "look, we can't sustain drives, so we need to do this in large chunks."

There's the bowtie on this fuckass performance by Fitzpatrick.

I trust whoever has the final score/postgame thread will accentuate all the positives Fitzpatrick showed today.

There's a minimum-word requirement on the posts, Tim.

Other random comments that made me laugh (and no, I'm not above putting my own comments here):

Darryl Morris is carrying on the illustrious tradition established by other Texans players who wore #26.

This game is reminding me why I'm so excited that Hockey season is near.

Also, it would be AWESOME if anyone else in the front seven would do ANYTHING to force the Giants to account for someone other than Watt.

Giants exploiting the problems we've been noting all year.

I just like to imagine Goodell explaining to those girls why the Ray Rice thing was no big deal.

If I were a Fitzpatrick defender, I might say something like, "well, he didn't have much support."  But I'm not a Fitzpatrick supporter.  In fact, the only thing I'd support of his is him never taking another snap in a Texan uniform.  If you think it's harsh in light of one bad performance, please consider, as I said above his quarterbacking history and the fact that his performance in the first two games was far from inspiring.

Yet it is true, that he was not alone in his sucktitude today.  The secondary, whose strength is tackling, was an absolute disaster, and the front seven not named Watt were completely incapable of making anything other than a downfield tackle.

At the end of the day, this team didn't go 2-14 last season by accident.  There are some absolute stars here, but there is simply not enough talent up and down the lineup to win consistently.  A good quarterback can hide some of those issues, but alas...

In no way, am I suggesting that Ryan Mallet is the answer, but I am absolutely saying that Ryan Fitzpatrick is not.

Offense:  Alfred Blue did an admirable job filling in for Arian Foster.  You could never have hoped for him to carry the team to victory, but he did his job.  Had the rest of the team done theirs as well as Blue, this may have been a happier post.

Defense:  J.J. Watt is the only guy who you could even consider in this space.  He wins this a lot, so I'm going to take this time to say that the team made the right move this offseason in releasing Danieal Manning.

Special Teams:  Nobody worthy of consideration here, so I'm giving this game ball to the duck that I smoked during the game.  Boom. 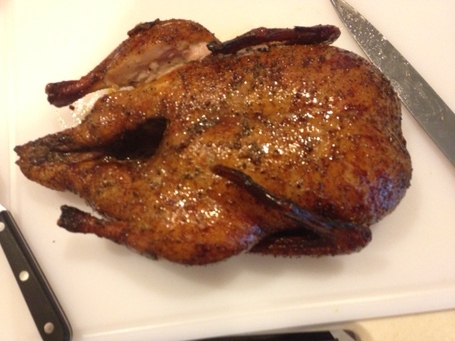